Spider-Man No Way Home has had a bunch of rumours floating around, the most prominent one being that it is a multiverse film. Many leakers and scoopers have reported on the fact that previous Spider-Men, Tobey Maguire and Andrew Garfield will make an appearance alongside Tom Holland. Spider-Man No Way Home will also see the return of previous villains from the franchise. 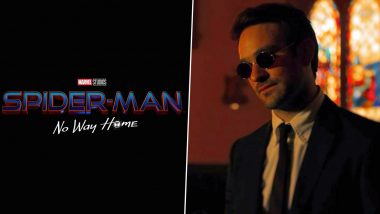 Spider-Man: No Way Home has had a bunch of rumours floating around, the most prominent one being that it is a multiverse film. Many leakers and scoopers have reported on the fact that previous Spider-Men, Tobey Maguire and Andrew Garfield will make an appearance alongside Tom Holland. Spider-Man No Way Home will also see the return of previous villains from the franchise, with two that have been already confirmed are Alfred Molina’s return as Doctor Octopus and Jamie Foxx’s return as Electro. Although the multiverse rumour does have a lot of fans excited, it’s the return of Charlie Cox in the role of Matt Murdock/Daredevil that has a lot of people ecstatic. Spider-Man No Way Home: New Merchandise ‘Leaks’ Tease Spidey Costumes and Major Fight Scene in Tom Holland’s Upcoming Marvel Movie (LatestLY Exclusive).

With this latest rumour it seems like we might actually be getting Charlie Cox back as Daredevil. Spider-Man No Way Home just had its reshoots started. We don’t know what the extent of these reshoots are, they can range from being minor pickups to altering some story beats. A recent Reddit post on the subreddit r/MarvelStudiosSpoilers stated that Charlie Cox had withdrawn himself from appearing at a convention in early August. This happened due to a last minute filming schedule change on Cox’s part. You can check out the post here down below. Spider-Man No Way Home: 5 Interesting Fan Theories Going Viral About Tom Holland’s Superhero Film.

With Spider-Man No Way Home reshoots currently going on, it has to be one hell of a coincidence for Cox to drop out of the fan fest. While this can just be a total fluke, it’s worth noting that Cox hardly has any recent projects lined up for his schedule. It seems like the rumour of him appearing in Spider-Man No Way Home is close to becoming a reality. . If true, this will be his first appearance since Daredevil Season Three in 2018 after which the show was cancelled. This caused a lot of fan outrage due to how popular the show was and with many claiming that it was the best thing to come of the MCU.

Last year it was also reported by Charles Murphy, a reliable leaker, that Charlie Cox will return as Matt Murdock in Spider-Man No Way Home. Given how good Murphy’s track record has been with leaks, it definitely seems like Matt Murdock appearing might be the case. You can read the scoop by Charles Murphy here. This rumour can be further elaborated by Brandon Davis of ComicBook.com who even stated during the production of Spider-Man No Way Home that Charlie Cox already filmed his scenes. He was quoted saying, ““I have a source who has told me - a very reliable source, the same source that told me that Owen Wilson is in Loki, and that turned out to be true, and a couple others before that says — Charlie Cox was on set for Spider-Man 3. I don't know if he's Daredevil yet or a fresh Daredevil, nobody knows if he's a fresh Daredevil, if he's a fresh Matt Murdock.”

What Matt Murdock’s role might be in the film still remains to be a mystery. One could speculate that he could show up as Peter’s lawyer to scratch his name off from Mysterio’s murder. Hopefully this will be the case and we finally get Daredevil back in the MCU. Spider-Man No Way Home is scheduled to release on December 17, 2021 and will star Tom Holland, Zendaya, Jacob Batalon, Benedict Cumberbatch, Alfred Molina and Jamie Foxx.

(The above story first appeared on LatestLY on Jul 21, 2021 09:06 PM IST. For more news and updates on politics, world, sports, entertainment and lifestyle, log on to our website latestly.com).