Ji Chang-wook Birthday: Did You Know The Healer Actor Kissed Kang Ha Neul More Than Any Of His Leading Ladies?

Ji Chang-wook's kisses with his leading ladies are nothing short of heart-racing. Even a stone-cold person will be left wanting for more. But who knew that most of Wook's kisses would be reserved for his stage co-star Kang Ha Neul. 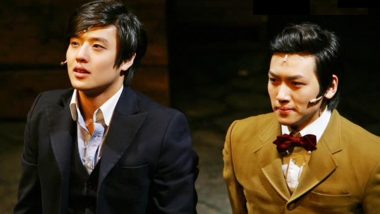 We all know what a good kisser Ji Chang-wook is. Or at least he appears to be. That scene from the terrace in Healer where he kisses a blind-folded Park Min-young lives rent-free in our head. While it may not be advisable, deep down we do yearn for a kiss on the terrace like that. Or the one where he snatches a passionate kiss with In Yoon-ah under a sheet of cloth while trying to move to safety...these scenes just never get old. But who knew that most of Wook's kisses went to Kang Ha Neul rather than any of his leading ladies. We aren't kidding, the Sound Of Magic actor revealed it himself. Hyun Bin-Son Ye jin, Ji Chang Wook-Park Min Young: Five Kdrama Kisses That Are Just Too Hot To Handle (Watch Videos).

While giving an interview to MBC’s Section TV Entertainment Relay back in 2015, Wook revealed this truth. As per Soompi, the anchor asked him if he had kissed anybody more than Park Min-young. The actor replied in affirmative saying he kissed Kang Ha Neul in his the musical play Thrill Me a lot more time. Since the musical was spanned across three months, you can do the math there.

Here's the excerpt from the interview:

Thrill Me is based on a book by Stephen Dolginoff and is based on the true story of Nathan Leopold and Richard Loeb. They wanted to commit the perfect crime and thus, killed a young boy in 1924. They were called the thrill killers. Ji Chang Wook played Loeb while Ha Neul was Leopold. Lee Min-ho, Ji Chang-wook, Nam Joo-hyuk - 5 Kdrama Men Who Broke Away From The Typical Romantic Hero Mould in The First Half Of 2022.

TJi Chang-wook and Kang Ha Neul returned on stage once again in 2018 for Shinheung Military Academy Musical. Now you know why Wook was so perfect as magician Ra-eul in the musical Netflix series The Sound Of Magic.

(The above story first appeared on LatestLY on Jul 05, 2022 09:20 AM IST. For more news and updates on politics, world, sports, entertainment and lifestyle, log on to our website latestly.com).