Lee Min-ho, Ji Chang-wook, Nam Joo-hyuk - 5 Kdrama Men Who Broke Away From The Typical Romantic Hero Mould in The First Half Of 2022

This year, our beloved Korean drama men decided to break free of their romantic cliched self on screen. They know we are deeply and disturbingly addicted to them, so they decided to give us something more to be proud of. Here are 5 kdrama actors who broke their romantic mould to deliver more. 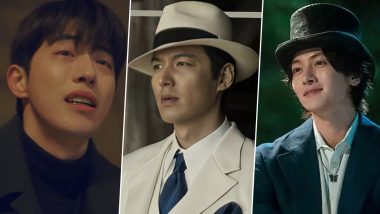 Korean drama men are not just scene-stealers but heart stealers too. They are gorgeous who are well groomed and good-looking. But what stands out is their performances which are smooth and effective. These are our romantic male leads, the ones we pine for but will never get. But this year, these men decided to do something else. They know we are deeply and disturbingly addicted to them, so they decided to give us something more to be proud of. As a recap of the first half of 2022, we will talk about these men who broke free of the cliched romantic mould to do something different, something wicked and a whole lot charming. Lee Min-ho, Kim Soo-hyun, Ji Chang-wook - 5 K-drama Actors Obsessed With 'No Caption' Instagram Posts.

Although we knew Min-ho's character has grey shades, to actually see him being this unreasonable man was quite a shocker. Even when he was a conman in Legend Of The Blue Seas, he was the perfect romantic guy. But in Pachinko, he is self-centered and arrogant. Yes, his past has a lot of bearings on what he becomes in the present, we just weren't used to watching him play bad. But we are really glad that he took the risk. Min-ho did a swell job as Hansu.

Ji Chang Wook In The Sound Of Magic

Wook is magician Ri-eul here who brings joy and wonder in the life of two teenagers. Wook was his charming self as usual but it didn't have a romantic connotation. In fact, the series delves deeper into the psyche of a man who is pressured to excel in studies so much so that he slips into a chaotic mental state. Chang-wook in a non-romantic role is a rarity and thus, we loved it.

Perhaps because the series is a slice-of-life one, Nam Joo-hyuk's character is not your regular kdrama romantic lead, even though there are many heart-fluttering moments between Kim tae-ri and him. He isn't the usual guy who beats all odds to be with his love. He represents the reality where breakups and shortcomings are common. While we drooled over him and found it quite unjust that there's no happy ending, Joo-hyuk gave a splendid performance of a man every person will identify with. When truly life gives you lemons, it leaves a bitter taste!

We were ready to see a much-in-love and cute Jung Hae-in in this controversial series but he turned out to be an anti-hero. The turnaround was drastic and took us aback. But we loved the way he portrayed the character of a man wronged by his own country men. Snowdrop Review: Kim Hye-Yoon's Volatile Portrayal Overshadows Jung Hae-in and BLACKPINK's Jisoo's Chemistry In This K-drama Series (LatestLY Exclusive).

For Lee Soo-hyuk, playing bad or tough isn't a new territory. Here, while the undercurrents of romance was palpable, he stayed firm, remorseless and steadfast. His previous series Doom At Your Service saw him as the serious and sexy Cha Joo-ik who fell in love unbeknownst to his own self. Tomorrow just shed that image completely.

(The above story first appeared on LatestLY on Jul 01, 2022 08:33 PM IST. For more news and updates on politics, world, sports, entertainment and lifestyle, log on to our website latestly.com).