Mia Khalifa Takes a Dig at Priyanka Chopra Jonas, Asks ‘If She Is Going to Chime In at Any Point?’

For those of you who dont remember, Priyanka's last statement on the situation came in December. Priyanka shared a message posted by singer Diljit Dosanjh on Twitter and shared her views on the situation. 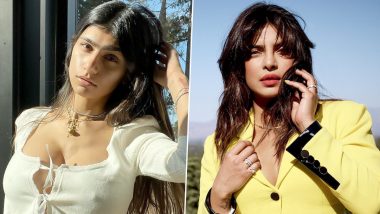 Lebanese-American former adult star Mia Khalifa has been openly speaking about the ongoing farmers protest happening in India. She earlier posted a picture of the protest and raised her voice against the irrationalities of the farmer's bill. Ever since then the model has been headlining the news for one thing or another in regards to the protest. Today she even posted a few sultry pictures on social media to draw people's attention towards the protest. Mia Khalifa Joins Rihanna, Greta Thunberg and Amanda Cerny to Extend Support to Farmers' Protest in India.

While Mia is quite actively speaking about the protest, she is pretty upset about Priyanka Chopra Jonas not speaking up about it. She took to Twitter to take a dig at the international star and said that she is wondering if Priyanka will speak about the issue or not. Mia even went on to compare her to Shakira who did not participate in any acknowledgement about the  Beirut devastation that took place earlier. "This is very much giving me Shakira during the Beirut devastation vibes," said Mia.

Is Mrs. Jonas going to chime in at any point? I’m just curious. This is very much giving me shakira during the Beirut devastation vibes. Silence.

For those of you who dont remember, Priyanka's last statement on the situation came in December. In December, Priyanka shared a message posted singer Diljit Dosanjh on Twitter and said, “Our farmers are India’s Food Soldiers. Their fears need to be allayed. Their hopes need to be met. As a thriving democracy, we must ensure that this crisis is resolved sooner than later.” Kangana Ranaut even has accused them of instigating the farmers saying that she will be hailed by the left media for misleading and encouraging farmers protests, pro-Islamists and anti-India film industry. Mia Khalifa Gives It Back to Protestors Raking Up Her Porn Past, Says ‘Still Standing With the Farmers’.

Apart from Mia, singer Rihanna, activist Greta Thunberg, influencer Amanda Cerny, writer Rupi Kaur, and others also raised their voice against the protests. Rihanna had tweeted: "Why aren't we talking about this?! #FarmersProtest." "We stand in solidarity with the #FarmersProtest in India," Greta had written.

(The above story first appeared on LatestLY on Feb 08, 2021 05:05 PM IST. For more news and updates on politics, world, sports, entertainment and lifestyle, log on to our website latestly.com).