Olivia Munn Admits She’s Worried About Baby Formula Shortage In The US, Says ‘I Wish I Could Breastfeed’ (View Post) 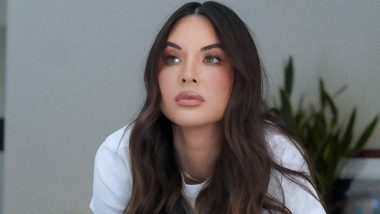 Los Angeles, May 22: Actress Olivia Munn admitted that she's worried about the baby formula shortage in the country. When speaking about the matter, the Betsy Braddock depicter in X-Men: Apocalypse said she wishes she could breastfeed her son, reports aceshowbiz.com. "It's so crazy when people say 'if you breastfeed you won't have to worry about the formula shortage!' I have low milk supply, so to keep my baby fed I depend on formula," the 41-year-old wrote on Twitter. Baby Formula Alternatives: From Soy to Cow Milk, Can You Feed Other Types of Milk to Infants?

"I wish I could breastfeed so I wouldn't be panicking about the shortage right now. But I don't have a choice." Munn and boyfriend John Mulaney reportedly welcomed baby Malcolm on November 24 last year, one day before Thanksgiving Day in Los Angeles.

It’s so crazy when people say “if you breastfeed you won’t have to worry about the formula shortage!” I have low milk supply, so to keep my baby fed I depend on formula. I wish I could breastfeed so I wouldn’t be panicking about the shortage right now. But I don’t have a choice.

It was not until one month later that the two lovebirds introduced their baby to the world. Since then, The Newsroom' alum has been opening up about her motherhood journey. "Breastfeeding is soooo hard, especially if you have low supply," she shared on her Instagram Story on January 19. "Eight weeks in and I've taken a million vitamins, countless teas, lozenges, tinctures and worked with two lactation consultants. Breastfeeding. Is. Hard."

Munn was not the only celebrity to weigh in on the formula shortage. More than a week prior, Bette Midler suggested mothers to breastfeed instead of complaining about the issue. "TRY BREASTFEEDING! It's free and available on-demand," she penned on Twitter.

The post, however, didn't sit well with many people. "This is truly something a stupid/uneducated person would say," one person said. While another shared: "A women who has not breastfed cannot just start breastfeeding on command. Your tweet is insulting to women. What should adoptive mothers do to feed infants? Adoptive/single fathers?"

"This is profoundly insensitive," a different user said. "First, there are a million reasons why some women can't nurse at all, or can't nurse full time & supplement with formula. Second, women don't even need a 'reason'. She can decide not to just because she doesn't want to. Period."

(The above story first appeared on LatestLY on May 22, 2022 02:40 PM IST. For more news and updates on politics, world, sports, entertainment and lifestyle, log on to our website latestly.com).