Telugu actress Anasuya Bharadwaj says she has always tried essaying a variety of characters ever since she made her debut in the 2016 film Kshanam. She emphasis her motive behind every character is to look different on screen, even if it doesn't make her look conventionally beautiful. 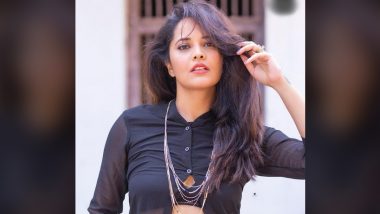 Telugu actress Anasuya Bharadwaj says she has always tried essaying a variety of characters ever since she made her debut in the 2016 film Kshanam. She emphasis her motive behind every character is to look different on screen, even if it doesn't make her look conventionally beautiful. "My purpose behind choosing a film is that I don't prefer looking very good, but I want to look different on screen. I don't like to bore people, I like to surprise them. Surprise is that one element and as much as people deny it, everyone likes to get surprised," Anasuya tells IANS. Pranitha Subhash, Nitin Raju Tie the Knot in a Private Ceremony, Actress Apologises to Their Loved Ones for Not Informing Them Beforehand (View Post).

The actress was recently seen in the film "Thank You Brother", a psychological thriller about two people stuck in an elevator. The actress played a pregnant woman named Priya, who is one of the two protagonists. Anasuya has also been part of films such as "Rangasthalam", "Gayathri" and "Kathanam" among others, and says that she is always conscious of maintaining a balance between glamorous and non-glamorous roles on screen. Raiza Wilson’s Dermatologist Files a Defamation Case Against the Actress, Demands for Rs 5 Crore Compensation.

"I am always making sure I have that I balance the glamour part and the intense, non-glamour part. I can be an actor of all classes and that is a conscious effort. "Thank You Brother" is Anasuya's first direct release on an OTT platform. The actress says that she never shot the film keeping the platform of release in mind.

"Thank You Brother is my first direct OTT film and we shot under circumstance where everything was very unpredictable. While shooting the film, I never had that approach whether it would release in theatre or on OTT. I am yet to experience the real OTT experience because I have yet to shoot a web series, even though I have signed a couple of them. I love OTT content and would surely enjoy being a part of it. I am a big movie lover, but what OTT has given me is it's taken us to an entirely different world that I equally enjoy," she says.

Does a story of a film impact her even after she has ended the shoot? She is prompt with her reply: "I can switch off once the director says 'cut'." She cites the example of her debut film. "Kshanam" to underline what she claims. The actress, a TV journalist and anchor before entering films, was offered a negative role in her debut film of 2016 -- something many female debutantes would rather avoid. Anasuya, however, didn't say no to the film's writer-hero Adivi Sesh.

"When Sesh narrated the story to me, he didn't tell me which character he was looking at me for. So, when he narrated, I actually imagined myself to be (heroine) Adah (Sharma)'s character. When he suddenly said that he was looking for the ACP's character, I was surprised. I think I took a day's time, and the next day woke up with clarity as to why not experiment and explore?" says Anasuya, whose new film "Thank You Brother" dropped on Aha.

(The above story first appeared on LatestLY on Jun 03, 2021 02:50 PM IST. For more news and updates on politics, world, sports, entertainment and lifestyle, log on to our website latestly.com).