An old video from Netflix's Little Things has gone viral on the internet that sees a group of friends making a racist joke on a pal by taking actor Dhanush as the reference. The superstar's fans are miffed with it and how. 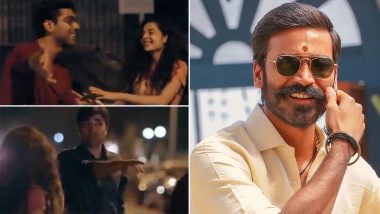 Racism, homophobia, islamophobia, and other issues are very prevalent in today's time. But what happens when a popular web series promotes any of this ideology by going the fun route. Well, the answer to this is that it's totally unacceptable. A video has gone viral on social media from Netflix's Little Things which sees the star cast making a racist joke using South superstar Dhanush as the reference. Yus, we are not kidding. The clip sees a man mocking his friend's appearance and compares him to actor Dhanush. Maaran: Dhanush’s Intense First Look From D43 Revealed on His Birthday (View Pic).

However, the scene does not end there, as the guy further adds that his friend would make Dhanush look like a supermodel. Adding to it, the saddening part is that the racist joke is enjoyed by all the friends in the scene. But this particular scene has not gone down well with Dhanush's fans. They have slammed it on Twitter. FYI, the scene is from season 1 episode 3 of the web series which stars Dhruv Sehgal and Mithila Palkar as leads. Check out netizens' reactions below. Dhanush Confirms Collaboration With Filmmaker Sekhar Kammula for Upcoming Trilingual Project.

Only negative thing in #LittleThing season 1 cant see this scene

This kind of pathetic mindset is everywhere like an actor should have an attractive body, fair skin. Look at his acting dude. He is the best!

Racism Needs to be Addressed!

F*cking web series struggling actors!!! Trolling one of the biggest superstar of India... And for ur kind information... The one ur trolling is doing one more Bollywood movie 🖕....remember the name @dhanushkraja 😎

Well, even if the video is old and has gone viral right now, we do not understand how can a streaming giant promote racism with an aim to serve entertainment. It's a long fight it seems as we all know how physical appearance and white skin matter the most to many. Stay tuned!

(The above story first appeared on LatestLY on Aug 03, 2021 12:40 PM IST. For more news and updates on politics, world, sports, entertainment and lifestyle, log on to our website latestly.com).