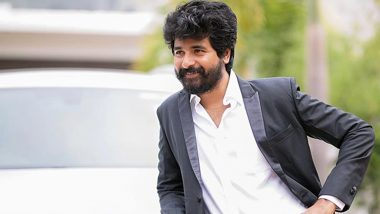 Director Nelson Dilipkumar and Kollywood’s superstar Sivakarthikeyan have teamed up for the second time for the upcoming flick titled Doctor. It was on the occasion of the latter’s birthday when the first look was released and movie buffs were mighty impressed. Owing to the coronavirus outbreak, the makers had to suspend the shooting of the film. And then there was the buzz that the film would be releasing by the end of this year. Now the makers have shared that they would be sharing an important update on Doctor today (July 13) evening at 7pm. Doctor First Look: Sivakarthikeyan’s Bloodied Hands Will Make You Curious for This Film!

Fans are thrilled to know about this update on Doctor. The film is produced under the banner of Sivakarthikeyan Productions. About the update the team shared on its Twitter page, “An important announcement regarding our #DOCTOR will be rolling your way at 7 PM Clock Stay tuned Bell #DoctorUpdateAt7PM.” Fans just cannot remain calm ever since this post has been shared. Sivakarthikeyan Starrer Doctor to Release in December 2020?

About this upcoming flick, Nelson Dilipkumar had shared with TOI, “It is an action comedy; one half of the film will take place in Chennai and the other half will be set in Goa.” The director also said, “The reason we titled it Doctor is because the film has elements that are related to doctors. Siva will sport a new look and has knocked off some kilos, too.” Doctor also features Priyanka Mohan in the lead. Stay tuned for further updates!

(The above story first appeared on LatestLY on Jul 13, 2020 02:23 PM IST. For more news and updates on politics, world, sports, entertainment and lifestyle, log on to our website latestly.com).