Four Years of #24TheMovie and Suriya Fans Call This Film As Their All Time Favourite! 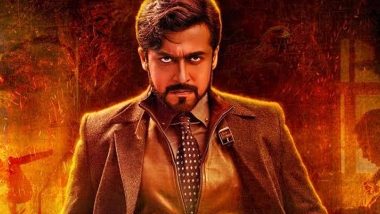 Suriya is one of the most bankable actors of Tamil Cinema. Be it any role, he has pulled it off with absolute ease. But in recent times, he has not been able to deliver a blockbuster film like his previous ones, especially like 24: The Movie. And fans are hoping that with his upcoming flicks, he’ll be able to rule at the box office like before. Today (May 6), the Vikram Kumar directorial 24: The Movie has completed four years of its release and even today this science fiction action movie is fans’ favourite. Suriya’s Ayan Clocks 11 Years; Fans Celebrate by Sharing Stills of the Mass Entertainer and Trending #11YearsOfBlockbusterAyan.

In 24: The Movie, Kollywood hunk Suriya was seen in a triple role - Dr. Sethuraman (a scientist), Athreya (Sethuraman’s twin) and Manikandan (Sethuraman’s son and Athreya’s nephew). This movie was based on the concept of time travel and it is said to be the best one until today. This movie had won two awards at the 64th National Film Awards – Best Cinematography and Best Production Design. Let’s take a look at what fans have to say about Suriya and this movie on Twitter. Suriya to Turn 45 on July 23, but Fans Trend #PhenomSURIYABdayIn100D and Start the Celebrations on Twitter Much In Advance.

Demand To Make 24: The Movie Available On OTT Platform

Unfortunately this 2 national award winning film for Best Cinematography & Production Design is not available on any Streaming platforms. It's high time the producers bring the Film to OTT. @Suriya_offl @2D_ENTPVTLTD @rajsekarpandian pic.twitter.com/KSLucxmSFg

One Of The Best Films Of Suriya

Fans Now Ask The Makers To Come Up With A Sequel

•The Movie Which Took Indian Cinema To Hollywood Level

Only Kollywood Movie Selected in

24: The Movie also featured Nithya Menen and Samantha Akkineni as the lead actresses. Reportedly, more than 60% of the film involves special effects and it is pretty clear fans were mighty impressed with the VFX work. The film’s score and songs were composed by AR Rahman. Suriya took a big risk with this movie, but it turned out to be a perfect watch for cinephiles.

(The above story first appeared on LatestLY on May 06, 2020 11:41 AM IST. For more news and updates on politics, world, sports, entertainment and lifestyle, log on to our website latestly.com).