Fresh reports now claim that after an FIR was registered against the crane operator, he has now been arrested by the cops. 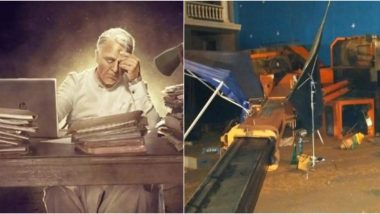 Kamal Haasan starrer Indian 2 recently hit the news for a rather unfortunate incident as a crane accident on the sets of the film resulted in the death of three unit members and injured ten others on February 19. The shocking incident left everyone in shock including the film's lead cast who took to social media to condole the tragic death of the crew members. Fresh reports now claim that after an FIR was registered against the crane operator, he has now been arrested by the cops. A case has been filed against the crane operator on grounds of negligence under IPSC Sections 287, 337, 338, 304 (a). As per reports, the crane operator who was absconding after the accident has now been arrested by Tamil Nadu Police.  Indian 2 Crane Accident: Kamal Haasan Announces Rs 1 Crore Financial Help to the Families of the Unit Members who Died in the Mishap.

As reported earlier, the three crew members who lost their lives during this crane accident were assistant director Krishna, art assistant Chandran and production assistant Madhu. Indian 2 actor Kamal Haasan after hearing about the horrible news expressed his grief on social media and also announced 1 crore worth of financial help for the families of those who lost their lives in this accident. Accident on Indian 2 Sets: Lead Actress Kajal Aggarwal Offers Deepest Condolences To The Families of the Deceased Crew Members.

Tamil Nadu: Police arrests the crane operator, in connection with the accident that occurred during the shooting of Kamal Haasan's film 'Indian 2' in Chennai

The film's producers Lyca Productions also announced financial aid of 2 crores for the families of the victims and also for those injured in this mishap. According to the reports, the team had created the set at EVP in Poonamallee where the tragic accident occurred. Further update on the case after the crane operator's arrest is awaited.

(The above story first appeared on LatestLY on Feb 21, 2020 04:22 PM IST. For more news and updates on politics, world, sports, entertainment and lifestyle, log on to our website latestly.com).