Talking about Pushpa, the first schedule of the film was wrapped up in January this year. The film’s first look was also released in April in Telugu, Tamil, Hindi, Kannada and Malayalam. 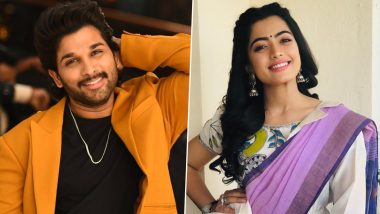 There is no denying the fact that we all missed seeing south stars like Allu Arjun, Rashmika Mandanna on the big screen during the lockdown. But ever since the new normal has kicked in, the south stars have also kickstarted their work. In what came as surprising news to the fans, the makers of Allu's next Pushpa have announced the commencement of the shoot today! Allu Arjun to Take a Pay Cut for Pushpa?

Taking it to Twitter, the film's production house - Mythri Movie Makers revealed that the team along with Allu Arjun, Rashmika Mandanna will start shooting for the film tomorrow. The team also shared a BTS video along with the tweet which showed how the team is prepping for the forthcoming shoot.

Allu Arjun was spotted at the Hyderabad airport yesterday as he flew to Andhra Pradesh to shoot for his upcoming film Pushpa with Sukumar and Rashmika Mandanna. It is being speculated that Maredumalli forests in AP near Rajamundry have been picked as the location for the shoot of the film.

Talking about Pushpa, the first schedule of the film was wrapped up in January this year. The film’s first look was also released in April in Telugu, Tamil, Hindi, Kannada and Malayalam.  The film was expected to hit the big screens this year but may be now shifted to a 2021 release due to the current pandemic situation. Pushpa First Look: Allu Arjun Dons a Fierce Avatar in Sukumar's Upcoming Actioner, Leaves Fans Impressed With This Special Treat on His Birthday.

(The above story first appeared on LatestLY on Nov 09, 2020 10:56 AM IST. For more news and updates on politics, world, sports, entertainment and lifestyle, log on to our website latestly.com).