Sharwanand was last seen in the action crime drama, Ranarangam, which received mixed reviews from critics. The 35-year-old will next be seen in the movie Sreekaram, directed by Kishore Reddy. 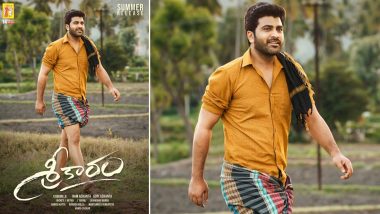 Sharwanand was last seen in the action crime drama, Ranarangam, which received mixed reviews from critics. The 35-year-old will next be seen in the movie Sreekaram. The makers have released the first look of Sharwanand from this upcoming flick, and fans are impressed with his desi avatar. Sharwanand is seen in multi-coloured striped lungi, teamed up with a simple shirt. The actor is seen walking through a field. The first look poster also reveals that Sreekaram will hit the big screens in summer this year. Oh yes! There’s just few more months left for Sreekaram to release. Jaanu Teaser: Samantha Akkineni and Sharwanand's Heartwarming Tale of Friendship and Love Looks Simply Amazing (Watch Video).

Sreekaram is directed by Kishore Reddy. It features Priyanka Arul Mohan as the lead actress. Sreekaram is produced by Ram Achanta and Gopi Achanta under the banner of 14 Reels Plus. The last film produced under this banner was Gaddalakonda Ganesh. This film is Sharwanand’s 29th film and the shooting of it had started in August 2019. If you haven’t checked out the first look poster yet, you must see it right away.

The music of Sreekaram has been composed by Mickey J Meyer, whereas the cinematography has been handled by J Yuvaraj. The makers are yet to announce the exact release date of the film. Besides Sreekaram, Sharwanand will also be seen in Jaanu, remake of the Tamil film 96 Telugu, in which he’ll be sharing screen space with Samantha Akkineni.

(The above story first appeared on LatestLY on Jan 27, 2020 11:39 AM IST. For more news and updates on politics, world, sports, entertainment and lifestyle, log on to our website latestly.com).