Thala Ajith has a huge fan base not just in the country but across the globe. Fans keep looking forward to the release of his films and right now one of his most-anticipated projects is Valimai. 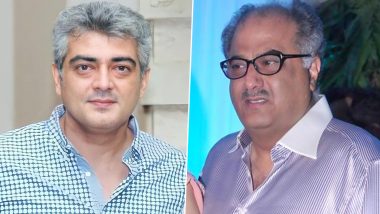 Ajith Kumar aka Thala Ajith has a huge fan base not just in the country but across the globe. Fans keep looking forward to the release of his films and right now one of his most-anticipated projects is Valimai. It has been a long time since fans are waiting for the makers to announce about the film’s release date. Rumours were doing rounds citing that Valimai might hit the big screens on the occasion of Thala Ajith’s birthday, which is on May 1 and it also happens to be his 50th birthday. Thala Ajith Starrer Valimai to Release on May 1, 2021?

In an interview with a leading magazine, producer Boney Kapoor has revealed a few intriguing details of Valimai and also mentioned that the team is yet to finalise the film’s release date. He told Forbes, “Valimai in Tamil with Ajith Kumar – the entire filming will be over by February 15, 2021 barring one stunt sequence to be shot overseas. Post production will start soon. The release date is to be finalised.” Valimai: John Abraham To Play A Cameo In Thala Ajith’s Film?

It was recently announced that the theatres in the country can operate at 100% occupancy. About it and his upcoming films theatrical release, Boney Kapoor further stated, “With a lot of businesses now working at full capacity, theatres at full capacity is great news for the entire entertainment sector. At the same time, I urge all exhibitors to provide the maximum safety and hygiene to the audience as it's always health first. I hope that the exhibitors, especially single screens, will get a lot of big films soon to be able to garner the footfalls again.” Valimai: This Family Pic From Thala Ajith Starrer Leaks Online; Fans Demand Makers To Share An Official Update.

“I do believe that big films will release soon in theaters. Three of my films across different languages, Vakeel Saab (Telugu), Valimai (Tamil) and Maidaan (Hindi), will release in theatres. All three are stories which transcend language barriers,” mentioned the popular producer. We are sure that fans would be delighted to hear that these biggies will hit the big screens!

(The above story first appeared on LatestLY on Feb 11, 2021 10:35 AM IST. For more news and updates on politics, world, sports, entertainment and lifestyle, log on to our website latestly.com).