After we recently saw the first look of his upcoming film World Famous Lover with Aishwarya Rajesh, the actor has now announced another project on social media today. 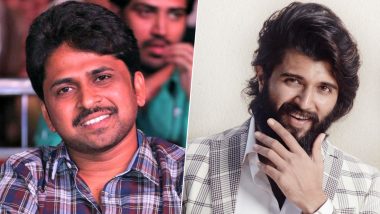 Vijay Deverakonda ever since his stellar performance in Arjun Reddy has become the blue-eyed boy of Telugu cinema. In fact, the actor is also drawing a lot of attention in Bollywood and who knows may be making a debut in Hindi cinema soon. In the meantime, he has become one of the most sought after stars in South. After we recently saw the first look of his upcoming film World Famous Lover with Aishwarya Rajesh, the actor has now announced another project on social media today. World Famous Lover Poster: Vijay Deverakonda and Izabelle Leit Impress You With Their Love Straight From Paris (View Pic).

December 18 happens to producer Dil Raju's birthday and hence Deverakonda took to Twitter to wish him and also announce his next collaboration with Raju. The Dear Comrade star revealed that he will be working with director Shiva Nirvana next. The yet untitled film is for now being referred to as #VD12. This news has certainly got his fans excited. Sharing the big news on Twitter, Vijay wrote, "Happy Birthday Raju sir Blockbuster Gift loading."

With love and respect,

Director Shiva Nirvana made the headlines this year with his famed film Majili. The film starred real-life couple Naga Chaitanya and Samantha Akkineni in lead roles. The film received decent reviews from critics and no we can't wait to see what the director will be offering with his upcoming project having Deverakonda in lead.  World Famous Lover First Look: Vijay Deverakonda's Rugged Avatar Gives Major Arjun Reddy Vibes.

While there hasn't been any news about the film's leading lady, Twitterati were quick enough to comment their favourites and several fans even hoped to see Kajal Agarwal alongside Vijay in this film. Tell us who you'd like to see opposite a Vijay in this film?

(The above story first appeared on LatestLY on Dec 18, 2019 11:19 AM IST. For more news and updates on politics, world, sports, entertainment and lifestyle, log on to our website latestly.com).