Wedding bells are ringing for Indian Idol host Aditya Narayan. The actor, who has been in a long term relationship with his Shaapit co-star Shweta Agarwal since 2010, will tie the knot by year end. 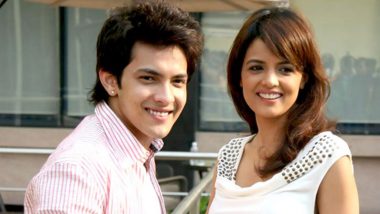 Wedding bells are ringing for Indian Idol host Aditya Narayan. The actor, who has been in a long term relationship with his Shaapit co-star Shweta Agarwal since 2010, will tie the knot by year end. Aditya and Shweta met on the sets of their film Shaapit and thus began their love story. And now, the pair plans to formalise their union in either November or December. Aditya Narayan Birthday: 7 Songs That Prove What a Bundle of Talent He Is (Watch Videos).

"I met Shweta on the sets of Shaapit and we hit it off instantly. Slowly and gradually, I realised I was head-over-heels in love and started pursuing her. Initially, she wanted to be ‘just friends', because we were both very young and needed to focus on our careers. Like every relationship, we have seen a lot of ups-and-downs over the last 10 years. Marriage is just a formality between us now, which hopefully should also happen by November or December. My parents know Shweta and like her a lot. I am happy that I have found my soulmate in her,” revealed Aditya to Bombay Times. Indian Idol 11: Udit Narayan Approves Of Neha Kakkar and Son Aditya Narayan's Match.

He further added, "I have never kept my relationship a secret. But at one point there was too much being said about it. So, when I decided to not talk about it, people left me alone.”

Not so long ago, Aditya and singer Neha Kakkar, who work together on Indian Idol, were linked together. Both Aditya and Neha, after a point, went on to admit that the whole link up was a joke taken too far. "It all started with a joke that was in the script of the show. And people assumed so many things after that. There was no truth to those rumours. Neha is a dear friend and I am happy for her. I have known Rohan since he was the second runner-up of 'Sa Re Ga Ma Pa Lil' Champs way back in 2008 that I hosted. I am thrilled that two of my good friends are getting married. I would have loved to attend it, but the wedding is happening in Delhi. I have a bad shoulder injury and I am not sure if I can make it. But almost everyone from the music reality show, including Vishal sir (Dadlani) and Himesh Reshammiya are going to attend the wedding," Aditya revealed. Indian Idol 11: Neha Kakkar and Aditya Narayan Re-Create Sridevi and Anil Kapoor's 'Kaate Nahi Kat Te' in a Scintillating Performance.

When questioned about his father Udit Narayan's statement approving of his and Neha's marriage only last year on Indian Idol, Aditya said that he had asked his parents to not talk about Shweta. "I had told my parents to not talk about Shweta, so when the rumours of Neha started, my father casually mentioned how if there was a possibility he would love to see us together. Audiences watch a fragment of our life and make assumptions. But I’d like to tell everyone that people, most of the time, do not know even five percent of a public figure’s life."

"I remember a few years ago, how people had assumed that Shweta and I had a big spat on the street and had broken up. After that it was so difficult for me to even go out with her. I accept that there can be issues in a relationship, but that doesn't mean it's the end of the road. Marriages break easily these days, so we were both taking our time to know each other. Now, after a decade, I feel it is the right time to take the plunge," concluded a happy Aditya. Congratulations Aditya and Shweta!

(The above story first appeared on LatestLY on Oct 12, 2020 08:44 AM IST. For more news and updates on politics, world, sports, entertainment and lifestyle, log on to our website latestly.com).