After Ramayan and Circus, Fauji, Nukkad, Shaktimaan - 9 Other Iconic Shows That Should Make A Comeback On DD National!

It has been confirmed that Doordarshan’s most-loved show, the classic TV series of the 80s, Ramayan, is going to make its return on the channel. 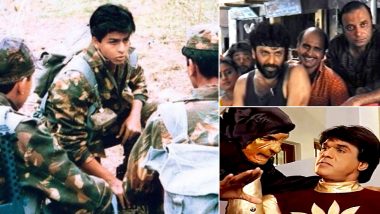 It has been confirmed that Doordarshan’s most-loved show, the classic TV series of the 80s, Ramayan, is going to make its return on the channel. Yes, Ramanand Sagar’s show will be making a comeback on DD National owing to public demand. Prakash Javadekar, Minister of Information & Broadcasting, confirmed about the same. The re-telecast will begin from March 28. Ramayan was a show that had enjoyed a great viewership back then, and we are sure, even today, it will have a great viewership. What's amazing is that another DD National gem starring Shah Rukh Khan, Circus will also be re-telecasted on the channel. Ramayan TV Series: Did You Know Each Episode of Ramanand Sagar’s Show, Aired on Doordarshan, Was Made on a Budget of Rs 9 Lakh?

As Ramayan and Circus are all set to get re-telecasted, there are few other iconic shows that we think that should also return on the channel. The shows aired in the 80s and 90s on DD National, were entertaining and are remembered even today. There were mythological series, comedy, drama, kids show, and so much more. Nukkad, Dekh Bhai Dekh, Shaktimaan, and many others, were a popular show back in those days. Let’s take a look at the 10 iconic shows which we loved back then, and want it to be re-telecasted on DD National. Ramayan Re-Telecast Schedule on Doordarshan: Here's When and Where You Can Watch The Arun Govil-Deepika Chikhalia-Sunil Lahri Mytho Show on TV.

For the unversed, Hum Log was Indian television’s first soap opera, premiered on July 7, 1984. Hum Log revolved around the life of a middle-class family and their daily struggles and aspirations. This show was written by Manohar Shyam Joshi.

The Ramesh Sippy and Jyoti Sarup directorial drama series, Buniyaad, was first aired in May 1986. The show revolved around the Partition of India in 1947 and its aftermath. It starred Alok Nath, who played the role of Master Haveliram, a freedom fighter and patriot. Soni Razdan, Anita Kanwar, Sudhir Pandey, Goga Kapoor, Kiran Juneja, Asha Sachdev, among others were also seen in key roles.

The sitcom, Yeh Jo Hai Zindagi, was aired in 1984. It highlighted the story of a typical middle-class couple, Renu (Swaroop Sampat) and Ranjit Verma (Shafi Inamdar), who are trying to cope up with various funny circumstances thrown at them by life.

Nukkad that dealt with the struggles of the lower income labour class in cities, starred Dilip Dhawan, Avtar Gill, Pavan Malhotra and Rama Vij in the lead roles. The first season of the show was quite a huge hit; its sequel titled Naya Nukkad was released in 1993.

Fauji marked the debut of Shah Rukh Khan in the small screen industry, who played the lead role, Lt. Abhimanyu Rai. Aired in 1989, Fauji showed the struggles of new recruits, who undergo various training to become commandos in the Indian Army. Besides it, it also shows the fun time they have with other cadets and the punishments they receive from their officers.

Shyam Benegal’s show Bharat Ek Khoj, telecasted in 1988, was based on the book The Discovery of India by Jawaharlal Nehru. The show highlighted about the country’s ancient history to the year India gained independence. Om Puri, Roshan Seth, Tom Alter and Sadashiv Amrapurkar were seen in the lead.

Malgudi Days, focused on the lives of the people living in the small town of Malgudi and how they faced trials and tribulations. This show was adapted from the collections of short stories written by RK Narayan.

Mukesh Khanna, who was also the show’s producer, played the titular role. He was seen as a person who attained superhuman powers through meditation and five elements of nature - space, earth, air, fire and water. Shaktimaan was a popular show, especially among the kids. It was aired from September 1997 to March 2005.

So these are the 10 iconic shows that we hope to make a comeback on DD National. We are sure, during this crucial period that the country is going through in the wake of coronavirus outbreak, these popular shows of the 80s and 90s will definitely make individuals feel lighter. Which show do you wish to see again on DD National?

(The above story first appeared on LatestLY on Mar 27, 2020 01:03 PM IST. For more news and updates on politics, world, sports, entertainment and lifestyle, log on to our website latestly.com).