Ramayan Re-Telecast Schedule on Doordarshan: Here's When and Where You Can Watch The Arun Govil-Deepika Chikhalia-Sunil Lahri Mytho Show on TV

Initially not sure about the success of the show, the channel had apparently not invested much into it, but the show went on to become a rage with the masses, eventually profiting Doordarshan like never before. 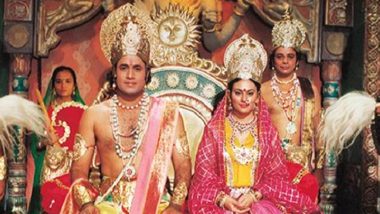 It has been officially confirmed now. Ramanand Sagar's mythological show Ramayan will be re-aired on Doordarshan, considering that there is a shortage of fresh content and episodes to telecast. A few days back, we had reported about how Colors has begun re-airing Bigg Boss 13 to compensate for lack of content on the channel because of the abrupt halting of television shows. This was followed by news of how other channels like Star Plus, Zee TV, Sony TV will also be airing their OTT shows on the tube in the wake of the lockdown and lack of episode banks. However, old episodes of The Kapil Sharma Show will be re-aired. COVID-19 Lockdown: Ramanand Sagar's Ramayan and BR Chopra's Mahabharat To Re-Run On Television.

And in what we can call a treat for the 90s audience (and others too), it has been confirmed that the show will indeed return to Doordarshan. And that too, with two episodes daily.

When and Where Can You Watch The Show:

DD National will air two hour-long episodes a day - one in the morning from 9 am - 10 am and another one in the evening from 9 pm to 10 pm. The show's telecast begins on March 28, 2020. Ramayana TV series to be Re-telecasted On DD National: 5 Videos of this Mythological Drama that Will Make You Applaud this Decision

Happy to announce that on public demand, we are starting retelecast of 'Ramayana' from tomorrow, Saturday March 28 in DD National, One episode in morning 9 am to 10 am, another in the evening 9 pm to 10 pm.@narendramodi

Ramayan starred actors Arun Govil, Deepika Chikhalia and Sunil Lahri as Ram, Sita and Laxman respectively. Initially not sure about the success of the show, the channel had apparently not invested much into it, but the show went on to become a rage with the masses, eventually profiting Doordarshan like never before.

(The above story first appeared on LatestLY on Mar 27, 2020 11:14 AM IST. For more news and updates on politics, world, sports, entertainment and lifestyle, log on to our website latestly.com).