Actress Disha Parmar, seen as the female lead Priya in 'Bade Achhe Lagte Hain 2, seems quite excited about her outfit and is looking forward to the 'sangeet ceremony' sequence in the show. 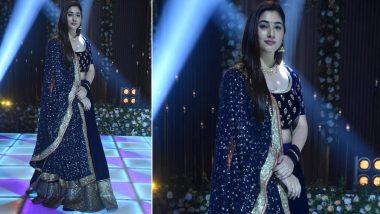 Actress Disha Parmar, seen as the female lead Priya in 'Bade Achhe Lagte Hain 2, seems quite excited about her outfit and is looking forward to the 'sangeet ceremony' sequence in the show. Giving a sneak-peek into 'Priya's look for the Sangeet, Disha opens up about how she has added her inputs when it came to 'Priya's overall look for the ceremony. Disha Parmar Stuns in a Pink Bikini, Rahul Vaidya Goes Shirtless During Their Maldivian Holiday (View Pics).

Seen in a simple yet elegant blue lehenga, 'Priya Sood' definitely looks beautiful. Talking more on it, Disha Parmar says: "Personal touch to the styling has been that I recently got married just two months ago and now, 'Priya' is getting married. So, the outfit that I wore in my sangeet was a royal blue colour. That's what I wanted to wear in this show, also. And, that's what we did." Rahul Vaidya Receives Heartwarming Birthday Wish From Wifey Disha Parmar (See Pics).

Adding further she says: "I remember for one of the events, I was wearing sneakers under my saree and that's what 'Priya' has also done for one scene. She's wearing white sneakers under her lehenga. So, these have been the little personal touches for the character 'Priya' by me." The ongoing track is now going to witness the wedding of 'Ram' (Nakuul Mehta) and 'Priya' (Disha Parmar). Bade Achhe Lagte Hain 2 airs on Sony Entertainment Television.

(The above story first appeared on LatestLY on Sep 24, 2021 05:35 PM IST. For more news and updates on politics, world, sports, entertainment and lifestyle, log on to our website latestly.com).