Bigg Boss 14 contestant Abhinav Shukla, who was very good friends with Jasmin Bhasin on the reality show has expressed that he does not want to stay in touch with the latter. Well, is it because of Rubina Dilaik? 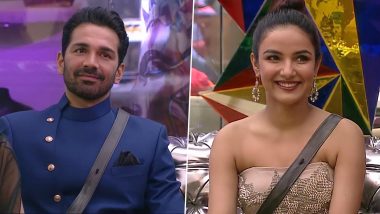 The controversial reality show, Bigg Boss 14 is no more airing on your idiot box, but that has not stopped the contestants from the latest season to churn news. The latest we hear is that Abhinav Shukla who was very close friends with Jasmin Bhasin on the show is no more keen to meet her in the outside world. Well, in an interview with ABP News, when Rubina Dilaik's husband Abhinav was asked in a rapid-fire round about which contestant he will never meet again, he took Jasmin Bhasin’s name. Bigg Boss 14: Jasmin Bhasin Threatens to Reveal Personal Details About Rubina Dilaik and Abhinav Shukla on National TV (Watch Video).

Jasmin, Abhinav and Rubina were close buddies in the initial episodes of BB 14, but later in a panchayat task, the ladies turned into enemies. After this, still, Jasmin was pals with Abhinav and was impressed by the man's patience level inside the house. Well, we wonder, what made Abhinav say that he does not want to keep any connection with Bhasin in the real world? Bigg Boss 14: Salman Khan Cries While Announcing this Week's Eviction, Was It Jasmin Bhasin or Abhinav Shukla's Elimination that Left Him In Tears? (Watch Video).

In the same interview, Shukla tagged Rahul Vaidya as 'the most irritating housemate whereas he felt that Jaan Kumar Sanu was the most confused' inmate. Earlier, in an interview, with ETimes TV, Abhinav had expressed that he does not understand why Jasmin has so much negativity for his wife.  Bigg Boss 14: Rubina Dilaik and Abhinav Shukla Tease Jasmin Bhasin and Aly Goni That They Will Get Married In the BB14 House.

(The above story first appeared on LatestLY on Mar 05, 2021 05:40 PM IST. For more news and updates on politics, world, sports, entertainment and lifestyle, log on to our website latestly.com).