Did Rubina Dilaiks smart game plan on Bigg Boss 14 and stardom also help her husband and now evicted contestant Abhinav Shukla survive the show for long? Although Rubina has survived being the only contestant nominated during her whole stay, she and her husband were always at an advantage in the show as they were playing together. 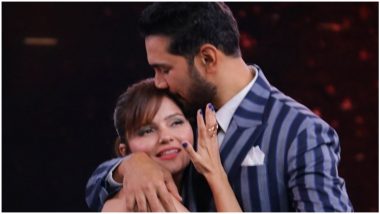 Did Rubina Dilaiks smart game plan on Bigg Boss 14 and stardom also help her husband and now evicted contestant Abhinav Shukla survive the show for long? Rubina is a popular television actress. She made a name with roles in shows such as "Chotti Bahu" and "Shakti: Astitva Ke Ehsaas Ki" helping her gain a massive fan base, who have fiercely voted for her. When she entered the house in the same season as Abhinav, the cumulative impact of her star power would have helped him more than her, simply because she is a bigger star on television. Bigg Boss 14 Promo: Abhinav Shukla Asks Rubina Dilaik if She Wants To Remarry; Rakhi Sawant Sobs While Missing Hubby Ritesh (Watch Video)

The actress's popularity amongst the masses is only too well known, after all, as compared to Abhinav, who was not as famous as her coming into the house, but managed to make a name during his stint. Even though he was nominated week after week, Rubina's fan power would have worked in his favour, too. Of course, his luck had to run out. Although Rubina has survived being the only contestant nominated during her whole stay, she and her husband were always at an advantage in the show as they were playing together and never needed anyone else's alliance to move ahead. Are Bigg Boss 14’s Abhinav Shukla and Rubina Dilaik Still Heading for Divorce? The Evicted Contestant Answers

The two had each other as free one vote, and that somehow helped them in completing their stay in the house. If you consider his stint in the house, Abhinav was never really a frontrunner, unlike Rubina. His most notable moments in the house have involved either his wife, or her immediate rival for the winner's tag, challenger Rakhi Sawant. The spotlight really shone hard on Abhinav thanks to Rakhi, when she started "crushing" on him. From wearing vermillion on her head to pulling his pant strings and even hoping for Abhinav to be a donor to her frozen eggs, Rakhi brought him to the centrestage.

Incidentally, there is a Rubina factor there, too. Rakhi, after all, did what she did in order to try and create a rift between husband and wife. Now that Abhinav is out of the show, Rubina can be seen playing for herself and focusing on how to emerge as the winner. However, Abhinav will once again be seen joining the show to celebrate Valentine's Day with her.

(The above story first appeared on LatestLY on Feb 17, 2021 01:15 PM IST. For more news and updates on politics, world, sports, entertainment and lifestyle, log on to our website latestly.com).