Bigg Boss 14 contestant Pavitra Punia says it loud on national TV that she had two boyfriends at the same time. Check out the video. 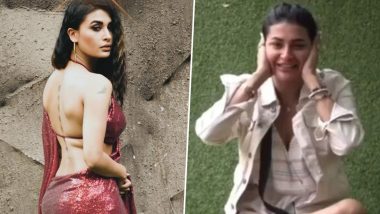 Bigg Boss 14 is back and how. The reality show which is said to sell because of arguments and fights has been serving the same from day one. Well, it has not even been a week and the drama is at its fullest inside the house. While the eleven contestants locked on the show do look promising, a few of them already have grabbed headlines thanks to their personal lives. TV actress Pavitra Punia has been in the news from the moment she entered BB 14 for her past affair with ex-contestant Paras Chhabra. However, that is not the scoop, as we now know a secret of the actress. Bigg Boss 14 Preview: Pavitra Punia Says ‘Aisa Doongi Na’ To Rahul Vaidya Amid Their Nasty Fight Over Daily Chores (Watch Video).

As per a video doing rounds on social media, Punia in a conversation with Nishant Singh Malkani, Sara Gurpal and Rahul Vaidya admits of dating two guys at the same time. "Bohot pehle ki baat hai, mere do boyfriends the. Main dono ko aise rakhti thi," she can be seen saying in the clip. Later when Rahul asks her if there was never a confusion with their names, to which Punia replies that she called both of them 'baby'. Bigg Boss 14 October 7 Episode: From Nikki Tamboli Being A Brat To Abhinav NOT Choosing To Save Rubina, Here Are 5 Happenings Of Day 4 of BB14.

This video has made it to the web at the time when Punia's ex Paras recently alleged that Pavitra had hidden her marital status when the two were dating. Talking about the Splitsvilla babe, Punia on the show till now has been this strong, sassy, sexy and quite an opinionated girl. Stay tuned!

(The above story first appeared on LatestLY on Oct 08, 2020 01:32 PM IST. For more news and updates on politics, world, sports, entertainment and lifestyle, log on to our website latestly.com).