Pavitra Punia and Rahul Vaidya get into an ugly spat over daily chores where the former's anger multiplies and how. Check it out. 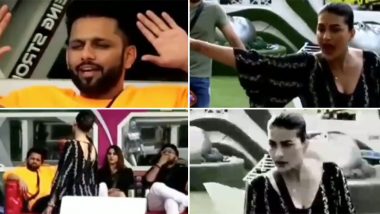 Bigg Boss 14 is getting messier from its first week itself. While the toofani seniors are surely grabbing the limelight with their presence on the show, but, on the other hand, we are loving it how Pavitra Punia is emerging as a strong and badass woman on the reality show. Well, now a new promo highlighting a major fight between Punia and Rahul Vaidya is out. As per the glimpse, we see Pavitra approaching the singer and informing him that the first bathroom is unclean and tissues are lying on the floor. To which the lad gets miffed and hits back at the lady commenting on her cooking skills. Bigg Boss 14 October 7 Episode: From Nikki Tamboli Being A Brat To Abhinav NOT Choosing To Save Rubina, Here Are 5 Happenings Of Day 4 of BB14.

Rahul reminds Pavitra that the 'sabji' she made the other day was was not good in taste. To which Punia could not calm down and angrily replies to him stating that if he has this opinion then he can cook for himself. Ahead the two get into an ugly spat and the girl also tags him as a flirt and the one who disrespects food. Also, you can't miss Pavitra saying 'aisa doongi na' to Rahul amid the argument. Apart from this, fans will also see all the girls dancing with Sidharth Shukla. Bigg Boss 14: Gautam Gulati To Enter The Show After Sidharth, Hina And Gauahar's Exit.

All in all, October 8 episode is going to be filled with many emotions. Talking about Punia, her carefree attitude on the show is working wonders and we really feel she is brave and bindass. Earlier also in the tattoo task with Sidharth Shukla, she had performed the task amazingly well. Stay tuned!

(The above story first appeared on LatestLY on Oct 08, 2020 08:45 AM IST. For more news and updates on politics, world, sports, entertainment and lifestyle, log on to our website latestly.com).