Bigg Boss 14 October 7 Episode: From Nikki Tamboli Being A Brat To Abhinav NOT Choosing To Save Rubina, Here Are 5 Happenings Of Day 4 of BB14

Day 4 of Bigg Boss 14 will see the true nature and true test of every contestant. While Bigg Boss will put immunity task winner Abhinav Shukla in a fix when he is given an option to choose between his wife Rubina's acceptance inside the house or his immunity tag. 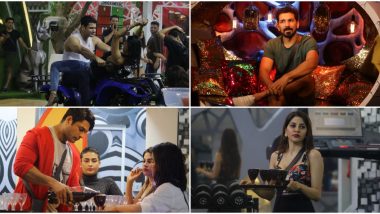 Day 4 of Bigg Boss 14 will see the true nature and true test of every contestant. While Bigg Boss will put immunity task winner Abhinav Shukla in a fix when he is given an option to choose between his wife Rubina's acceptance inside the house or his immunity tag. This is followed by the housemates berating Nikki for her selfish ways. A girls-seducing-Sidharth task is introduced along with another task for the fresher girls, which is ruined by Nikki and Pavitra. For those who missed the Day 4 of Bigg Boss 14 episode, here are the top 5 highlights. Bigg Boss 14 October 7, 2020 Synopsis: Testing Times For Rubina Dilaik and Abhinav Shukla in the Bigg Boss House.

The day starts with housemates trying to decide amongst themselves on who will get to take their personal items today. Amid all the talk, Nikki's adamant nature of demanding 2 items against everyone else's necessary items, does not go down well with the entire house and everyone stands up against her. Nikki justifies her behaviour by saying that she has not made friends yet to sacrifice for them. Bigg Boss 14 EXCLUSIVE: Nikki Tamboli Is 'Glad to Be Getting Work Amidst The Pandemic'.

Nikki's adamance on not sacrificing starts a new fight over food after Gauahar says that there won't be food unless everyone decides the day's 7 items. Pavitra and Nikki get into an argument over the latter's attitude. The housemates lash out at Nishant when he says he will sacrifice for Nikki, with Eijaz asking Nishant to not give up his right. After more than half of the episode full of fights and Sidharth prodding her, Nikki sacrifices her items and asks everyone to eat food. Bigg Boss 14: Rubina Dilaik, Jasmin Bhasin, Nikki Tamboli and Pavitra Punia Will Have to Seduce Sidharth Shukla for an Immunity Task.

Abhinav Does The Unthinkable

Bigg Boss offers Abhinav a choice - to either pick his immunity or forego his immunity to make wife Rubina an accepted fresher in the house. Abhinav does the unpredicted and refuses to give up his immunity for his wife. Abhinav takes Rubina side and asks her to stay strong and not crumble under pressure.

The next immunity task is introduced where Sidharth will be seen as the centre of attraction with the fresher girls fawning over him in three different levels - Sid's Tattoo Parlour, Sid's Garage and Sid's Cafe. The winner of the task will be Sidharth's choice and she will gain immunity from this week's evictions.

After the first leg of Sid's Island task, Sidharth is asked to pick a winner. He carries all the girls forward but cuts out Sara's name from the task as she had confessed to Sid that she in an introvert and that it takes her time to open up.

So these were the episode highlights of Bigg Boss 14 on October 7, 2020. While Abhinav made  smart, yet unpredictable move and chose to remain safe in week 1, Nikki Tamboli came out to be a brat. We also saw Nishant's angry-young-man avatar come to fore. The next episode will see the Rahul Vaidya and Pavitra Punia's budding love story come to a grinding halt when both pick at each other's bathroom and kitchen duties respectively.

(The above story first appeared on LatestLY on Oct 08, 2020 12:14 AM IST. For more news and updates on politics, world, sports, entertainment and lifestyle, log on to our website latestly.com).