Bigg Boss 14: Rahul Vaidya’s Mother Geeta Lashes Out At Rubina Dilaik and Abhinav Shukla, Says Their Plans To Malign Her Son Have Failed

While Bigg Boss as a show has seen its fair share of dushmanis, the strongest enemity in Bigg Boss 14 is between Rahul Vaidya and Rubina Dilaik. And whenever the contestants come face to face with each ther, hate sparks fly everywhere. 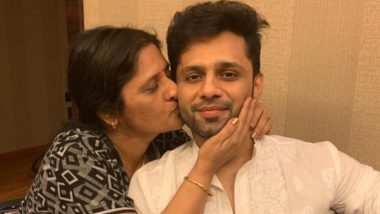 While Bigg Boss as a show has seen its fair share of dushmanis, the strongest enemity in Bigg Boss 14 is between Rahul Vaidya and Rubina Dilaik. And whenever the contestants come face to face with each ther, hate sparks fly everywhere. Talking about that, Rahul's mother Geeta Vaidya told ETimes TV, "I feel Rubina very well knows that Rahul is a strong contender and she purposely maintained a distance from him. She did not interact with him and since she knows that he is strong. Abhinav and Rubina target him." Bigg Boss 14 December 02 Synopsis: Rubina Dilaik and Kavita Kaushik Lock Horns, Latter Threatens The Former Of Revealing Husband Abhinav Shukla's Truth.

She continued, "They find him competition and they know they can’t compete with him and that’s why they cross him at every path. They tried their best to malign Rahul’s image in the beginning - Rubina tried through Jasmin, but she was not successful. They called him a criminal and also tried to say that he is not good to the girls of the house but their tricks did not work. They should not do this as it looks very cheap on national television." Bigg Boss 14: Pavitra Punia Clears the Air Over Hurling Abuses at Senior Gauahar Khan, Says ‘I Was Just Hurt’.

His mom is alo of the opinion that only her son and Nikki Tamboli are rel in the house. "Amongst all the contestants I find Rahul Vaidya and Nikki Tamboli’s personalities real. Whatever they are in real, they are showing and they are not pretending to be someone else. Rahul speaks on the face whatever he feels about someone. Nikki’s reaction is also instant, she speaks on people’s faces if she doesn’t like them. They don’t have filters. I find their personalities real and that’s why they get along. They are very smart. They know each other very well and have no expectations from each other and that’s why they bond. Now let’s see what happens in the future."

When quizzed about Disha Parmar and Rahul's marriage proposal to her, his mom revealed, "I haven’t got a chance to speak to Disha Parmar about Rahul’s proposal. Because we were not aware about it and whatever happened was after he made the confession on the show. She would come to our house during Ganesh Chaturthi with other friends of Rahul. She has visited on other multiple occasions but nothing of this sort he ever told us. Maybe now when he went inside the house and kya Pata Dil mein ghanti bajji hogi, he must have realised his feelings and he proposed to her on national television. Disha is a very good girl and if her answer is yes, then I will pick up the phone and call Disha myself."

"They share a great bond, they have worked together in two music videos. She is a good friend of Rahul and that’s why she visited our house. But Rahul did not tell us about his feelings before entering the house. We also got to know about his feelings on the show. I am ready for their relationship and if Disha is fine, once Rahul comes home we will discuss and take things forward," she concluded.

(The above story first appeared on LatestLY on Dec 02, 2020 08:06 PM IST. For more news and updates on politics, world, sports, entertainment and lifestyle, log on to our website latestly.com).