Pavitra Punia was one of the strongest contestants on Bigg Boss 14 and her eviction shocked one and all. Now, after getting eliminated from the show, the actress has cleared the air over the incident when she hurled abuses at Gauahar Khan. Read on. 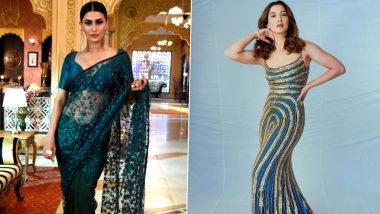 Television actress Pavitra Punia's eviction from Bigg Boss 14 shocked one and all. While her game on the reality show was strong AF, fans got bored with her love angle with Eijaz Khan. However, one thing which created chaos inside and outside Bigg Boss was Pavitra's abusive words for Gauahar Khan. It had so happened that after an immunity task, Sidharth Shukla and gang which also included Pavitra were eliminated from the show. This had irked Punia and she had hurled abuses at senior Gauahar. Infact, even Gauahar had expressed her displeasure over the act. Bigg Boss 14 Weekend Ka Vaar Nov 29 Episode: Pavitra Punia Evicted, New Contestants Announced - 5 Highlights of BB 14.

Now, after getting evicted from the show, Pavitra in an interview with Pinkvilla cleared the air and said, "I am not saying Gauahar was wrong but I will tell you what irked me. They had entered as seniors who were to guide us and challenge us in their two weeks stay inside the house. Right? They were doing their jobs well and we were learning from them and adapting accordingly. The seniors were not going to get any trophy or were not contesting in the season. Throughout we saw, Hina and Sidharth said that they will play fair because at the end of the day, this was our season and we had to take it forward."

"During that task, neither did Sidharth tell his team to form an alliance nor did Hina’s but Gauahar went to Hina’s team with the offer of forming an alliance. My perspective was that if you claim to love Bigg Boss so much, and when it was clear in the first two weeks that the strongest players for the season were in Sidharth’s team who could throw a lot of shades inside, so if you were thinking from the show’s perspective then why remove them from the game?" she added. Bigg Boss 14: Pavitra Punia Hurls Abuses At Senior Gauahar Khan, Latter Shuts Her Down With A Sassy Reply (View Tweet).

She continued, "I am not blaming her but that is exactly what irked me. She was ready to throw us out as a team not because  Eijaz, Pavitra and Nikki were in the team but only and only because of Sidharth Shukla as she had issues with him. I think she did not like him because she apparently tweeted about him a lot during his season. As contestants, we could see Gauahar had anger for Sidharth and I felt she removed all that frustration during the task which I felt was harsh and unfair."

She expressed how it was a loud reaction and she did not mean what she uttered. "Her idea of an alliance was not necessary. Sidharth was also angry. In that frustration and anger, I ended up abusing. I really had no personal grudge against Gauahar, but it was a reaction to her action. It was a loud reaction but I did not mean it that way. I was just hurt. That’s it." Stay tuned!

(The above story first appeared on LatestLY on Dec 02, 2020 07:24 PM IST. For more news and updates on politics, world, sports, entertainment and lifestyle, log on to our website latestly.com).