Vikas Gupta suffers an emotional breakdown in the upcoming episodes of Bigg Boss 14 and will reveal it all to Nikki Tamboli and Rubina Dilaik and others about how he has been battling so much of emotional stress over the past few years. 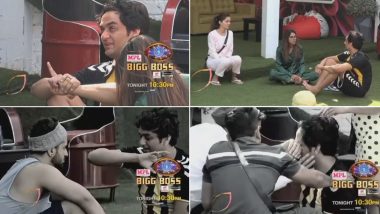 Looks like challenger Vikas Gupta has had it with playing cordially in the Bigg Boss house and also in his personal life. The producer, who will be seen harassed by Arshi Khan in the upcoming episodes, will reveal it all to Nikki Tamboli and Rubina Dilaik and others about how he has been battling so much of emotional stress over the past few years. Bigg Boss 14 December 25 Update: Vikas Gupta and Eijaz Khan's Past Leads To Them Getting Violent With Each Other (Watch Video).

Totally broken, Vikas Gupta opened up about an ex who continues to ruin any and all relationships Vikas has had after on. The name taken by him was muted by Bigg Boss and the whole house, barring Arshi, came out to the garden area to support and console Vikas who was running low on morale. Bigg Boss 14: Arshi Khan Decides to Quit the Show After Salman Khan Blasts at Her for Provoking Vikas Gupta (Watch Video).

However, he later on also vowed that he kept quiet for 4 and a half years but now he is done. He went on to say, "Ab tak naam liya nai tha tumhara but ab lunga. He and I were together for a year-and-a-half before he came into the show (Bigg Boss). Ab mai jab wapas bahar aaunga, ab mai apko chodunga nahi.” Our heart goes out to Vikas after his emotional breakdown. We hope he finds the zeal to play the game bang on now!

(The above story first appeared on LatestLY on Dec 28, 2020 02:12 PM IST. For more news and updates on politics, world, sports, entertainment and lifestyle, log on to our website latestly.com).