On tonight's Weekend Ka Vaar with Salman Khan, fans are going to witness a lot of drama, thanks to Arshi Khan. In the promo out by the makers, we see the host slamming Arshi for talking ill about Vikas Gupta's mom. Check out the full story here. 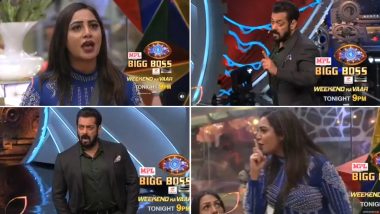 Bigg Boss 14's episode tonight (Dec 19) is going to be packed with a lot of drama. How do we know this? Well, as per the latest promo released by the makers, we see Salman Khan slamming Arshi Khan for provoking Vikas Gupta and talking ill about his mother. For the one's who aren't aware, Arshi's constant poking had led to Vikas pushing her inside the pool.  Mastermind's this violent behaviour was not tolerated by Bigg Boss and so he was kicked out of the house. On tonight's Weekend Ka Vaar, we see Salman blasting Arshi over the same. Bigg Boss 14 December 18 Episode: Aly Goni Wins Captaincy, Rakhi and Arshi Praise Jasmin - 5 Highlights of BB 14.

The host in the video can be seen telling Arshi that if he would have been on Vikas' place, he would have also done the same considering she spoke badly about Gupta's mother. To which, we see the lady replying that she did not use any bad words for Vikas' mom. Amid this, we also see Rubina Dilaik adding that Arshi talks nonsense about her and Abhinav Shukla's relationship. This makes Arshi angry and she tells Rubina to 'shut up'. Ahead, a pissed Arshi also says, 'I am leaving this show.' Bigg Boss 14 Dec 14 Episode: Vikas Gupta Pushes Arshi Khan Into The Swimming Pool, Gets Evicted- 5 Highlights of BB 14.

Will Arshi leave the show? The answer to this question lies in tonight's episode. Having said that, a few reports online claim that Bigg Boss did open the house door for Arshi, but she took a U-turn and decided to stay inside. Looks like a lot of drama is awaiting tonight. Stay tuned!

(The above story first appeared on LatestLY on Dec 19, 2020 04:36 PM IST. For more news and updates on politics, world, sports, entertainment and lifestyle, log on to our website latestly.com).