She also added that things are fine between them and her husband will soon be flying down to India to discuss the first marriage and try to sort things out. 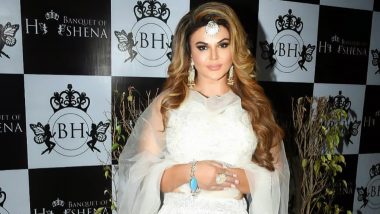 Rakhi Sawant created a wave with her arrival at the Bigg Boss 14 house and some of the key highlights from her stay at the BB house were her discussions about her husband Ritesh. It has been a few years since Rakhi got hitched to this UK based businessman but no one has ever seen her husband till now. Rakhi was seen talking about Ritesh's earlier marriage and kids, her financial problems and her requests made to Ritesh to appear on the show but still no sign of the husband was noticed. Bigg Boss 14’s Rakhi Sawant Begged Husband Ritesh to Reveal His Identity, Says He Agreed to Do It Before They Have Babies.

Now, new media reports suggest that Rakhi might be participating in Nach Baliye 10 with her husband.  ETimes reported the actress hinting at being approached for one of the biggest TV reality shows. She kept her comments reserved when she was asked if it is Nach Baliye 10, she is hinting at. Rakhi said, “I don't want to disclose much but we have been offered a big reality show together. I won't name the show. I don't want to talk about it much. Things are in the pipeline.”

“The makers are talking to Ritesh because he is a big businessman. I initially thought 400 people are working under him but I recently learnt that he is managing 10,0000 employees. If he comes to India to do the show, he will have to leave his work for three-four months and be here,” added Rakhi. She also added that things are fine between them and her husband will soon be flying down to India to discuss the first marriage and try to sort things out.

Apart from this, Rakhi landed in legal trouble when she and her brother, Rakesh Sawant were accused of fraud and an FIR was registered against them in Delhi. According to several media reports, in a case from 2017, an FIR was logged in the Vikaspuri police station of Delhi against Rakhi Sawant and her brother a few days back. The FIR has been lodged by Shailesh Srivastava, who had invested his money in a project that Rakhi was a part of. Rakhi Sawant Lands in Legal Trouble, FIR Lodged Against the Actress and Her Brother for Fraud.

She also organised a get-together for her fellow housemates of the recently-concluded season of the reality show Bigg Boss 14. Vikas Gupta, Nikki Tamboli, Vindu Dara Singh, Jaan Kumar Sanu, Sonali Phogat and Rahul Mahajan were seen having a great time in the images Rakhi posted on Instagram. The actress-dancer said that she is concerned about the health of her mother Jaya Sawant. She had appealed to her fans to pray for her mother's well-being after coming out of the show.

(The above story first appeared on LatestLY on Mar 16, 2021 10:10 AM IST. For more news and updates on politics, world, sports, entertainment and lifestyle, log on to our website latestly.com).