After watching Anushka Sharma’s Paatal Lok, which received overwhelming response from fans and critics, the expectations from her spooky fairytale Bulbbul was sky-high. Produced by the actress’ production house, Clean Slate Filmz, Bulbbul released today on Netflix and it has opened to mixed reviews. 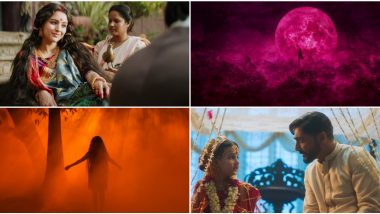 After watching Anushka Sharma’s Paatal Lok, which received overwhelming response from fans and critics, the expectations from her spooky fairy-tale Bulbbul was sky-high. Produced by the actress’ production house, Clean Slate Filmz, Bulbbul released today on Netflix and it has opened to mixed reviews. The star cast - Tripti Dimri, Rahul Bose, Avinash Tiwary, Parambrata Chattopadhyay, Paoli Dam – performances are being hailed by critics, but the script was apparently weak and a predictable one. Bulbbul Movie Review: Tripti Dimri’s Strong Performance and Its Visual Flair Make Anushka Sharma's Spooky But Lethargic Offering Worth A Watch.

Bulbbul, directed by Anvita Dutt, is set in the late 19th century Bengal, a story dipped in folklore. A visually striking set-up, mythical influences, gripping background score, Bulbbul has something unusual to offer. Let’s take a look at what the critics have to say about this latest Netflix film. Bulbbul First Look: Anushka Sharma Shares Spooky Motion Poster Of Her Next Production, Film to Hit Netflix on June 24.

Hindustan Times - Over-directed but underwritten, Bulbbul is a visually striking film that is let down by a weak script. Because the characters are so thinly written and the surprises so carelessly telegraphed, Dutt’s film is forced to rely more heavily on technical details.

NDTV - The visually lush film uses unshod feminine feet, the mysterious forest, the trees and its shifting colours as narrative codes that conceal secrets and truths that are out there for all to see if one is attentive enough. Notwithstanding the generic nature of the storyline, the director and the technicians (most notably cinematographer Siddharth Diwan) ensure that the audience stays invested in the proceedings. On the acting front, Tripti Dimri justifies the top billing with a performance that blends the coquettish with the mysterious in fine, enigmatic harmony.

Scroll.in - The extraordinarily crisp Bulbbul doesn’t have too much room for suspense, with some of its answers telegraphed early on and the others arriving in an unwelcome rush. There appears to be a layer or two missing in the screenplay, but whatever is on the screen for 94 minutes is smart, sensitive and haunting.

Firstpost - Among other joys that it offers then is the fact that Bulbbul is one of those rare contemporary Hindi films to travel beyond the Hindi belt and Punjab to a culture and place that is rarely visited by Bollywood these days. With its eerie air and mythical, mystical tone, Dutt’s film brings alive a spectre that is not scary in the way the average Hindi film bhoot or daayin is – what is scary are the circumstances that brought this creature to such a pass.

News18 - The new Netflix film, directed by Anvita Dutt, makes us familiar to the era of ‘zamindars’ in the late 19th and early 20th centuries, but there is a definite shift in the traditional outlook of that time period. Though many Hindi filmmakers have explored the era with a lot of reverence, they mostly refrained from delving deeper into the dark corners of those glorious mansions. On that front, Bulbbul has to offer some new angles, but they might leave you wanting for more.

The Quint - The first thing that strikes us about Bulbbul is how visually striking it is. The frames exude a mysterious hue… from rich crimson to an enigmatic purple. The shadow play, foreboding tone and Siddharth Diwan’s brilliantly tactile cinematography - everything adds to the eerie ambience.

DNA - The brilliant thing about Bulbbul is that it sets the tone in the first five minutes, of being much more in-depth and carrying substance than just being identified as a horror film. Anvita Dutt, who made a directorial debut with Bulbbul does a commendable job of keeping the narrative tight and getting her point across in a short duration. If this is an indication of how Anvita's screenplays are going to look like, audiences are surely in for a ride.

So that’s what the critics had to say about Bulbbul. If you have managed to watch the new Netflix film, share your views with us in the comment section below.

(The above story first appeared on LatestLY on Jun 24, 2020 03:07 PM IST. For more news and updates on politics, world, sports, entertainment and lifestyle, log on to our website latestly.com).