Decoupled is one of those series which wants to prove to everyone chauvinism is not entirely wrong and then falls flat on their face. Decoupled is streaming on Netflix. It stars R Madhavan, Surveen Chawla, Akash Khurana and Apara Mehta in key roles. 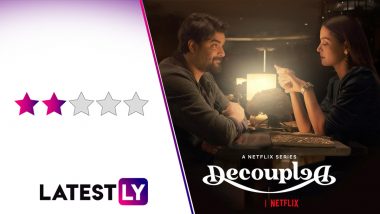 Decoupled Review: Has it ever happened to you that you are struck by a really snazzy comeback much after the conversation ends? Or time when you have certain thoughts in your head which you can't say out loud while meeting a person? What if you are celebrated for saying pungent things, sometimes right, sometimes elitist and sometime sexist? Decoupled is just that where a man is devoid of a social filter and others feel obliged to bear with his behavior. Decoupled: R Madhavan Talks About His Role in Upcoming Netflix Show.

Arya (Madhavan) is a misanthropic author, second to Chetan Bhagat in popularity and sales. His rivalry with the latter is an ongoing theme. Arya's marriage to Shruti (Surveen Chawla) is fast disintegrating but they keep delaying their divorce for the sake of their daughter. Every episode deconstructs their relationship or at least tries to.

Giving credit where it is due, the characters of Arya and Shruti have been well written. The role of Arya would be a dream for every chauvinist that there is and then some. He is an obnoxious, self-absorbed cynic who has a problem with everything and everyone. To be fair, at times, his jibes, though cruel make sense and you tend to align with him. As for Shruti, she is a venture capitalist and is very clear about what she wants.

The series does a good job with a few characters that you may have observed if you mingle with the rich. The pretentious need to show how generous they are towards the poor by 'rescuing a battered woman' to make her a maid and the likes. When Arya exposes this, everyone's offended.

However, a series that claims to be on a marriage going bust, forgets about it as quickly as it establishes the premise. It actually is a thin plot revolving around a man who shows everyone how wrong they are and yet can't accept that his wife doesn't want to be with him anymore. That has been stretched till eight episodes with no purpose. Interestingly, there are few stages you go through while watching the series. In the initial episodes, Arya's character makes you wonder if you watching an elitist version of Pyaar Ka Punchnama and your blood boils. But then you realise Arya is the same with everyone, irrespective of gender. You relax. When a few of his rants start making sense, you feel 'meh, he isn't entirely wrong'. And then the series turns slapstick with humour worse than Humshakals. At its best, Decoupled feels like a less smart version of Curb Your Enthusiasm that lacks the razor sharp wit of the Larry David show.

Then there are a bunch of redundant scenes. It would have been enough to give a sense of Arya's rivalry with Bhagat, but writer Manu Joseph and director Hardik Mehta decided to give him a few scenes as well. For some reason, having multiple scenes of people interrupting Arya's conversations with other people is supposedly funny, so we have waiters interrupting, a passenger in a flight interrupting, so on and so forth. In fact, the scene where he comes across a man performing namaz in a closed area makes no sense at all. Also, Decoupled made me aware that maids are on Twitter (Offended? This series is a bad influence).

Even the marriage, for a man who believes he knows what is actually on people's mind compared to what they show, he couldn't see the cracks in his own marriage. Also, he couldn't straight away tell his father-in-law to use a condom for someone who loves to be straightforward about everything. OTT Releases of The Week: R Madhavan's Decoupled & Henry Cavill's The Witcher Season 2 on Netflix, Ranvir Shorey's 420 IPC on ZEE5 and More.

Well, sorry, it seems we are ranting now, guess the series rubbed us the wrong way.

Check out the trailer of Decoupled here

Watching Madhavan in a character like that needs a little getting used initially. But then we realise the fact that it is Madhavan, the character doesn't end up becoming a caricature. When he makes his point, you decide to hear him out before rage flips you over. He keeps a handle on the character really well and never tries anything to make you like him. Surveen is just perfect as Shruti. The confidence on her face is contagious! Akash Khurana as Shruti's irritant father is fantastic and so is Apara Mehta.

-Madhavan and some of his jibes

Decoupled is one of those series which wants to prove to everyone chauvinism is not entirely wrong and then falls flat on its face while attempting to do so. Decoupled is streaming on Netflix.

(The above story first appeared on LatestLY on Dec 17, 2021 07:46 PM IST. For more news and updates on politics, world, sports, entertainment and lifestyle, log on to our website latestly.com).