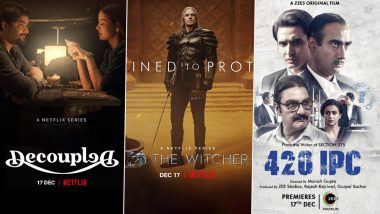 December, it's that time of the year when people should enjoy every moment of their life to end the year with a good note. Now, as we are stepping on the third week of December 2021, there are few captivating series and movies releasing on OTT platforms like Netflix, ZEE5, SonyLIV and Apple TV+. Talking about the biggest release of the week it would be The Witcher Season 2, which will stream on Netflix from December 17. Created by Lauren Schmidt Hissrich, the fantasy drama show's second season is based on Blood of Elves and the beginning of Time of Contempt. The series stars Henry Cavill, Freya Allan, Anya Chalotra, Eamon Farren and Joey Batey, among others. The Witcher Season 2 Trailer: Henry Cavill and Anya Chalotra’s Netflix Series Turns Darker as It Explores the Destinies of Geralt of Rivia and Ciri (Watch Video).

Another big release of the week would be Decoupled, which will drop on Netflix on December 17. The comedy-family drama follows a story of a writer and his wife who announce their divorce with a grand party. Both of them will unveil their crazy journey of their marriage in the show. The web series features R Madhavan, Surveen Chawla in key roles. Another interesting release of the week would be 420 IPC, it will release on ZEE5 on December 17. Helmed by Manish Gupta, the crime-drama stars Gul Panag, Vinay Pathak, Ranvir Shorey, Rohan Vinod Mehra and Arif Zakaria in lead roles. The movie revolves around Bansi Keswani (Vinay), who is a chartered accountant by profession and gets in legal trouble for an economic fraud case. 420 IPC Trailer: Vinay Pathak and Ranvir Shorey’s ZEE5 Suspense Film Looks Nail-Biting (Watch Video).

(The above story first appeared on LatestLY on Dec 13, 2021 05:11 PM IST. For more news and updates on politics, world, sports, entertainment and lifestyle, log on to our website latestly.com).