Netflix has roped in Chris Hemsworth, Miles Teller, and Jurnee Smollett for its upcoming film, Spiderhead, based on a short story by George Saunders. 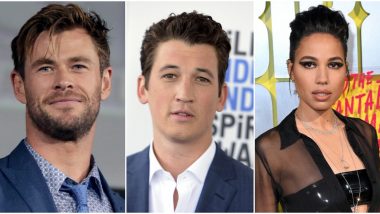 Los Angeles, Sep 27: Netflix has roped in Chris Hemsworth, Miles Teller, and Jurnee Smollett for its upcoming film, Spiderhead, based on a short story by George Saunders. Joseph Kosinski is directing the feature film, which marks the filmmaker's reunion with Teller after Top Gun: Maverick, fronted by Tom Cruise. Chris Hemsworth: Definitely Not Saying Goodbye to Marvel After Thor - Love And Thunder.

While Hemsworth is coming off the success of another Netflix project Extraction, Smollett is best known for the series Underground and big-screen outing as Black Canary in DC's Harley Quinn: Birds Of Prey. According to Deadline, Rhett Reese and Paul Wernick, writing partners on Zombieland and Deadpool, have penned the script.

Spiderhead is set in the near future, when convicts are offered the chance to volunteer as medical subjects in hopes of shortening their sentences. The focus is on two prisoners who become the test patients for emotion-altering drugs that force the prisoners to grapple with their pasts in a facility run by a brilliant visionary who supervises the programme.

Saunders' short story was first published in The New Yorker and later collected in his bestselling anthology, Tenth Of December. Spiderhead will be produced by Eric Newman for Screen Arcade through the producer's first-look deal at Netflix, along with Hemsworth; Oren Katzeff and Geneva Wasserman for The New Yorker Studios; Reese & Wernick, Tommy Harper and Jeremy Steckler.