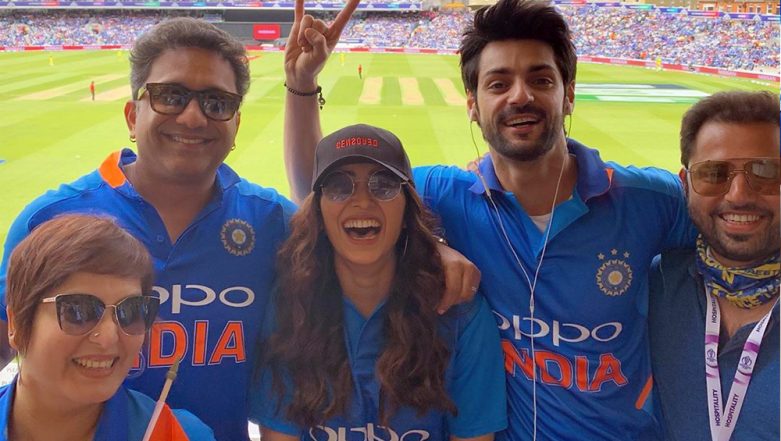 TV actor Karan Wahi, who has been a heartthrob for many, turns a year older today (June 9) and birthday wishes have been pouring in for the actor from his fans, friends, and colleagues on social media. The actor has flown to England to ring in his 33rd birthday and the pictures on his social media (Instagram) feed, is proof that the actor is having a helluva time there. Karan, who has joined the cast of Sacred Games 2, was busy shooting; however, he has taken a break from his busy schedule to take a trip to his dream destination not only to celebrate his special day but also to watch ICC World Cup 2019 India-Australia match. Isn't that just the dream birthday? Karan Wahi Blasts Media Portals as They Mistook Him For a Molestation Accused! Check Out His Clarification

Yes, you read that right! After a crazy night of partying with his friends, the actor is now at The Oval in London, where the match is being held. An hour ago, Karan took to the photo-sharing app to share a picture from the game venue and wrote, "A Dream BIRTHDAY ... #INDvsAUS #theoval #london @ashanegi @tranjeet thanku everyone for all the love"

Just like every other fan, Karan too can be seen sporting the Indian jersey, cheering for team India. The actor is not alone but Pavitra Rishta actress and his bestie Asha Negi too has accompanied Karan for the game. Karan Wahi Opens Up On Working With Jennifer Winget Again After Dill Mill Gayye; Says Their Bond Is ‘Something Special’

On the career front, Karan, who last seen hosting shows like The Voice and Box Cricket League Season 4, will next be seen in Netflix' Sacred Games 2.

Meanwhile, Karan was recently in the news as he was mistaken for a music composer Karan Wahi, who allegedly molested a 22-year-old model and is behind bars now. When the actor found out that his picture has been carried in the news articles instead of the music composer's, he took to social media to slam the publication.

The actor shared a story on his Instagram handle, which read, "I would request some of the MEDIA PORTALS to be little responsible and verify which Karan Wahi they are talking about before putting my pictures in an article, which is not about me. Ur carelessness can cause the other person a lot of issues. Thank u." (sic). Stay tuned to this space for more updates.