Sushant's ex Ankita Lokhande was also one of the options for the above question. The rest of episode was also a reminder of how grim 2020 was, with how lockdown has affected the contestants. 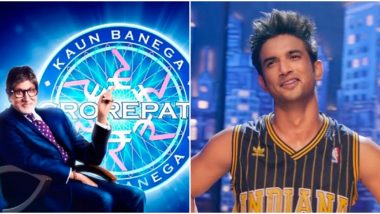 Amitabh Bachchan's Kaun Banega Crorepati 12 has reached Sony TV, fighting odds, which itself is an victory. Kaun Banega Crorepati 12 came into fruition after its host has battled COVID-19 and came out a victor. The shoot of the reality show had been shot during the pandemic, keeping all the social distancing rules and precautions in mind. The first question of the reality show episode that aired on September 28, 2020, is all about 2020. And in another question it gave tribute to the late Sushant Singh Rajput. KBC 12: Here's What To Expect From The New Season Of Amitabh Bachchan's Show And Where To Watch It.

In one of the early questions given to the first question, Amitabh Bachchan asked the contestant to identify the actress making her debut in the film whose song's audio will be played on the speaker. The song was the title track of Dil Bechara, which happened to be the last released film of Sushant Singh Rajput, that released directly on Disney+ Hotstar. The answer was, of course, Sanjana Sanghi, which the contestant Arati Jagtap from Bhopal answered directly.

While talking about the film, Amitabh Bachchan mentions how Sushant left them earlier this year and how everyone is missing him dearly. Sushant Singh Rajput Death Case: Verbal Spat Erupts Between Kaizen Ibrahim's Lawyer And NCB Team Outside Mumbai Court, Watch Video.

Dil Bechara was the remake of the Hollywood film The Fault in Our Stars, and was directed by Mukesh Chhabra. In the wake of Sushant's tragic demise, the movie received high rating on IMDB. Currently, it has a rating of 7.2 on the site.

Interestingly, Sushant's ex Ankita Lokhande was also one of the options for the above question. The rest of episode was also a reminder of how grim 2020 was, with how lockdown has affected the contestants.

(The above story first appeared on LatestLY on Sep 28, 2020 09:34 PM IST. For more news and updates on politics, world, sports, entertainment and lifestyle, log on to our website latestly.com).