A verbal spat broke out between lawyer of Kaizen Ibrahim, who was arrested for allegedly supplying drugs to actor Rhea Chakraborty's brother Showik Chakraborty, and officers of NCB. 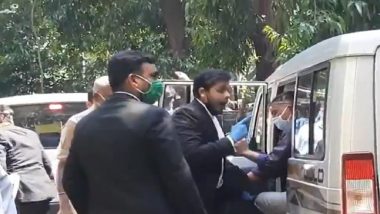 Mumbai, September 5: A verbal spat broke out between lawyer of Kaizen Ibrahim, who was arrested for allegedly supplying drugs to actor Rhea Chakraborty's brother Showik Chakraborty, and officers of Narcotics Control Bureau (NCB) outside a Mumbai court on Saturday. A video of the altercation between Kaizen Ibrahim's lawyer and NCB personnel also surfaced. Ibrahim was arrested on September 3 by the NCB which is probing the drug angle in actor Sushant Singh Rajput's death case. Sushant Singh Rajput Death Case: Showik Chakraborty, Brother of Rhea Chakraborty, Samuel Miranda Sent to NCB Custody Till September 9.

It appears that the court had summoned Ibrahim while hearing his bail plea.  At that time, he was being taken away by the NCB team who had secured judicial custody of him for 14 days. Ibrahim's lawyer confronted the officers and tried to stop their vehicle. "You please take him up. The court has called him. This is not the way. The court has summoned him. Please take him up," the lawyer can be heard telling the NCB team. However, in what context, they were arguing is not clear. Sushant Singh Rajput Death Case: Showik Chakraborty, Samuel Miranda Taken to Civic Hospital for Medical Tests.

#WATCH: A verbal altercation broke out between Kaizen Ibrahim's lawyer and NCB team. Kaizen Ibrahim has been sent to 14-day judicial custody by a Mumbai court. #SushantSinghRajputCase pic.twitter.com/GuTJlDvo01

Here it may be noted that Mumbai's Esplanade Court granted Ibrahim bail sometime after he was sent to judicial custody of the NCB. The NCB registered a case on August 26 under various sections of the Narcotic Drugs and Psychotropic Substances Act, naming Rhea Chakraborty, her brother Showik, talent manager Jaya Saha, Sushant's co-manager Shruti Modi, and Goa-based hotelier Gaurav Arya, after the Enforcement Directorate wrote to it about the drugs angle.

This followed the discovery of WhatsApp messages between Rhea and Shruti Modi, Miranda and Sushant's flatmate Siddharth Pithani. NCB is the third Central agency to join the probe into the death case of Sushant, after the Central Bureau of Investigation (CBI) and the ED.

(The above story first appeared on LatestLY on Sep 05, 2020 04:15 PM IST. For more news and updates on politics, world, sports, entertainment and lifestyle, log on to our website latestly.com).