Mrinal Dutt: Web Series or Digital Platform Opens Up Space for Actors Like Me

The show also features Rajeev Khandelwal and Divyanka Tripathi, and Mrinal is clearly in awe of these senior actors. "Rajeev and Divyanka are very sweet people. We had a great time. I would like to work with them again. People have been asking for a second season of the show," he said. 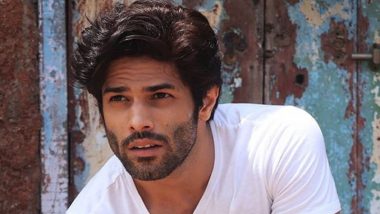 Mumbai, October 14: The digital platform has opened up avenues for young actors for whom penetrating Bollywood is not as easy as star kids, and television offers a limited scope. One such actor is Delhi boy Mrinal Dutt, who has garnered praise for his performances in web series such as Coldd Lassi Aur Chicken Masala and Hello Mini.

"Both film and TV offer limited scope. As an actor I have always wanted to work in stories that are not just the daily drama type. The story should be well written, compact and should not be dragged endlessly like daily soaps. (The) Digital (platform) has opened up the space, especially for actors like me who want to work with good directors and in good stories. I am happy that I am able to associate with great people on the digital platform in the form of co-actors, directors and producers. It provides a great opportunity to showcase talent," Mrinal told IANS. Jennifer Winget and Karan Wahi Come Together For A Web-Series; Announce The News To Fans! Watch Video.

Mrinal moved to Mumbai nine years ago with the dream of becoming an actor. Starting with television shows and commercials, the actor currently has his kitty full with web series. About the success of the Pradeep Sarkar-directed series Coldd Lassi Aur Chicken Masala, the 29-year-old actor said: "I am very happy about it. It is a show with a mass connect and people are watching it. I am fortunate to have got a chance to play a character that is almost the life of the show. It was fun. Pradeep Sarkar directing it was the best part."

The show also features Rajeev Khandelwal and Divyanka Tripathi, and Mrinal is clearly in awe of these senior actors. "Rajeev and Divyanka are very sweet people. We had a great time. I would like to work with them again. People have been asking for a second season of the show," he said.

Mrinal's latest show is the MX Player web series Hello Mini, an erotic thriller based on Novoneel Chakraborty's novel Marry Me Stranger of the Stranger trilogy. Talking about his character, the actor revealed: "I play a guy who comes from a dysfunctional family. He decides to become an actor and comes to Mumbai. In the process, he meets the protagonist Rivanah Banerjee. How they fall in love and what happens next in their lives, and the madness and chaos that follows, is what the show is about." On the work front, Mrinal Dutt will next be seen in the Netflix film "Upstarts" and the MX Player web series "Pavan Pooja".

(The above story first appeared on LatestLY on Oct 14, 2019 11:53 AM IST. For more news and updates on politics, world, sports, entertainment and lifestyle, log on to our website latestly.com).