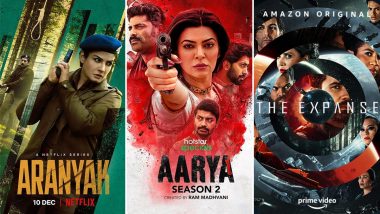 We are moving on the second week of December 2021 and almost on the last month of the year, and there are few amazing series and movies releasing on OTT platforms like Disney+ Hotstar, Amazon Prime Video, Netflix and ZEE5. Talking about the biggest release of the week it would be Aarya Season 2, which will drop on Disney+ Hotstar on December 10. Helmed by Ram Madhvani, Sandeep Modi and Vinod Rawat, the crime-thriller series will unveil the tale of Aarya (Sushmita Sen) and how she deals with and faces newer challenges while fighting her own battles for the family. The second season stars Sushmita, Chandrachur Singh, Ankur Bhatia, Namit Das and Sikander Kher, among others.  Aarya Season 2 Trailer: Sushmita Sen, the Mafia Queen, Is Back For Some More Action (Watch Video).

Another big release of the week would be Aranyak, which will stream on Netflix on December 10. The crime-mystery web show features Raveena Tandon, Parambrata Chatterjee, Ashutosh Rana and Saurav Khurana in key roles. Created by Rohan Sippy, the story revolves around solving a mysterious and puzzled murder case by hill station cops. Another interesting release of the week would be The Expanse Season 6, which is all set to premiere on Amazon Prime Video on December 10. Bankrolled by Mark Fergus and Hawk Ostby, the sci-fi TV show is based on the series of novels of the same name by James S. A. Corey. The Expanse Season 6 features Steven Strait, Cas Anvar, Dominique Tipper, Wes Chatham, Cara Gee and others. Aranyak Trailer: Raveena Tandon, Ashutosh Rana and Parambrata Chattopadhyay’s Action-Packed Series Looks Thrilling, to Release on Netflix on December 10 (Watch Video).

(The above story first appeared on LatestLY on Dec 05, 2021 04:04 PM IST. For more news and updates on politics, world, sports, entertainment and lifestyle, log on to our website latestly.com).