And finally, after a long while, there is some update on Salman Khan's Bigg Boss 14. Yes, the controversial reality show will indeed return to television with Salman Khan as the host, once again. 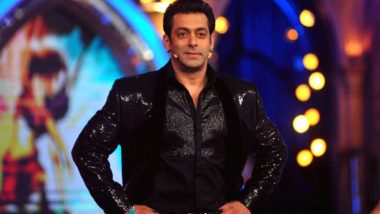 And finally, after a long while, there is some update on Salman Khan's Bigg Boss 14. Yes, the controversial reality show will indeed return to television with Salman Khan as the host, once again. Off lately, names of probable Bigg Boss 14 contestants like Zaan Khan, Shubhangi Atre and Akanksha Puri among others, have been doing the rounds. However, we all know that the final list will only be revealed before the show goes on air. Bhabiji Ghar Par Hain’s Shubhangi Atre Confirms She Was Offered Bigg Boss 14 But Had to Reject It Due To THIS Reason!.

Coming back to the show's on-air date, as per a report in Peepingmoon.com, the show that was to be announced in June will be postponed for a few months. And taking inspiration from Amitabh Bachchan, Salman too might shoot the show's promo from his current residence, his Panvel farmhouse. Oh... and the theme will be social distancing. Are Bigg Boss 14 Auditions Happening In May? Narrator Vijay Vikram Singh Debunks Latest Rumour on Salman Khan's Reality Show.

A source revealed to the portal, "The show was to be announced in June with Salman Khan returning as the host for the 14th season. The plan had to be postponed due to the lockdown. Now, just as Amitabh Bachchan shot a video for KBC’s upcoming season from home, Salman might shoot the BB14 announcement from his Panvel farmhouse. The creative team is working on a format to share with him." Bigg Boss 14: Paras Chhabra’s Ex-Flame Akanksha Puri to Be a Part of the New Season? Here's The Deets

Bigg Boss 13 had premiered in September 2019 and Bigg Boss 14 will reportedly air from October 2020 onwards and the reason for the delay along with the lockdown is Khatron Ke Khiladi 10. It can be recalled that KKK10 aired only a couple of its fresh episodes before halting owing to lockdown. It was that time reported that the makers had wanted to cash in on the TRP race when other shows begin, instead of competing with shows returning for a reason.

"The major reason behind BB14’s delay is Khatron Ke Khiladi 10. The adventure reality show which premiered on February 22, telecast four episodes only. It had to be shut due to the lockdown. But KKK10 garnered good ratings in its initial episodes. Now the channel doesn’t want to take a chance by bringing any change to its format," the source quoted.

The source also revealed, "Post lockdown, the show will continue for at least two more months. This has led to BB14 getting delayed. The show might premiere in the first week of October."

What is also being speculated is that there won't be any extensions unlike BB13 with this season because with fresh shows getting delayed due to lockdown, the channel has a host of other line-ups to offer to the audience. Wow.. that's some heavy-duty BB14 information to process. Nevertheless, only time will tell if any of the above is to happen or not.

(The above story first appeared on LatestLY on Jun 12, 2020 11:00 PM IST. For more news and updates on politics, world, sports, entertainment and lifestyle, log on to our website latestly.com).