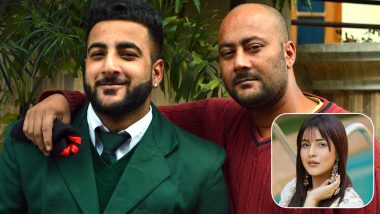 A few days back, Shehnaaz Gill's father Santokh Singh Sukh was in the news after a Jalandhar lady accused him of raping her at gunpoint and then threatening to kill her. The incident that happened on May 19, 2020, came to light on May 24, 2020 when the lady filed an FIR with the Beas Police Station. However, in separate interviews, both Santokh and his son Shehbaz Gill had denied the accusations. Bigg Boss 13 Contestant Shehnaaz Gill's Father Santokh Singh Sukh Accused of Raping Woman at Gun Point, FIR Filed Against Accused Who is Absconding.

And now that air travel has been permitted all over India, Shehbaz has gone back home to Amritsar to stand by his father amidst his legal troubles, a report in Bollywoodlife mentioned. The report stated that Shehbaz flew in from Mumbai to Delhi and then drove down from Delhi to Amritsar with a friend. Shehbaz Gill On Father Santokh Singh Sukh's Rape Case: 'The Lady Is Lying, My Father is Not Wrong and Justice Will Be Served Soon'.

The report also mentioned that Santokh Singh Sukh (who has been reportedly absconding since the incident came to public light), has appealed to authorities to conduct a thorough enquiry into the case. He had in his conversation with a Punjab news channel, claimed that the lady accusing him of rape was a fixer with a shady background, who would charge people money to get their names taken off of FIRs and that she was defaming him for publicity and monetary gain.

Reports also mentioned how Santokh Singh Sukh has footage of the said day the rape took place, that proves he did not leave his house to escort the lady, as per claims of the victim.

(The above story first appeared on LatestLY on May 27, 2020 03:52 PM IST. For more news and updates on politics, world, sports, entertainment and lifestyle, log on to our website latestly.com).