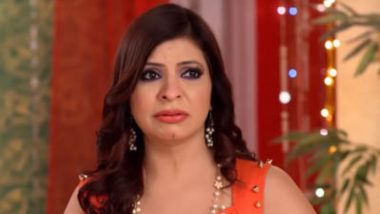 Social media can be a boon as well as a bane. While the platform does help celebrities to connect to a larger audience, however, at the same time, the threat of one's account getting hacked is also real in today's time. Talking on the same lines, Taarak Mehta Ka Ooltah Chashmah's Jennifer Mistry Bansiwal's aka Roshan Bhabhi is the latest who has fallen prey to cybercrime, as her Instagram account has been hacked. It was Jennifer's co-star Ambika Rajankar who essays the role of Hansraj Hathi's wife on the sitcom took to her Insta to share the news. Taarak Mehta Ka Ooltah Chashmah’s Mandar Chandwadkar aka Bhide’s Instagram Account Gets Hacked (Watch Video).

In her post, Ambika informed about the hacked news and also expressed that Jennifer, who plays the role of Roshan Singh Sodhi, is trying her best to resolve the problem by reporting. Ambika further added that if anyone receives direct messages or replies from Jennifer, ignore for the time being. She concluded her post by urging Roshan bhabhi's fans to be patient and pray that she gets her account back. Anupamaa Actor Sudhanshu Pandey Falls Prey to Cyber Crime, Instagram Account Gets Hacked and Deleted.

Jennifer Mistry Bansiwal on Taarak Mehta Ka Ooltah Chashmah plays the role of a Parsi woman who has gotten married to a Sikh man. Thus, emphasising on intercaste marriage. TMKOC has been one of the most loved sitcoms since quite a long time as each character has its own spark. Coming back to Roshan bhabhi, all we wish she gets her Instagram back on track. Stay tuned.

(The above story first appeared on LatestLY on Dec 08, 2020 03:33 PM IST. For more news and updates on politics, world, sports, entertainment and lifestyle, log on to our website latestly.com).