UP's Cheif Minister Yogi Adityanath's media advisor Shalabh Mani Tripathi had earlier warned the team of Tandav as he informed that police officials from UP are arriving in Mumbai soon to arrest the makers of the show. 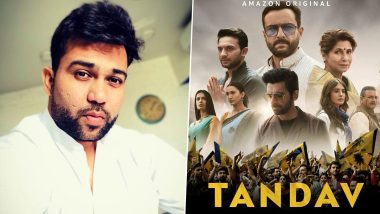 Tandav starring Saif Ali Khan, Mohd. Zeeshaan Ayyub has been surrounded with controversies pertaining to the kind of content that they showed in the Amazon Prime Video web series. Some scenes where Zeeshaan's character portrayed Lord Shiva in a satirical play and gave a speech were considered to be derogatory by a section of the online audience. An FIR was registered against the cast of the show and the makers of Tandav including Ali Abbas Zafar for hurting religious sentiments. Several politicians even reached out to the Ministry of Information & Broadcasting to look into the matter. Tandav Row: The Makers of Saif Ali Khan’s Amazon Prime Series Offer ‘Sincere Apologies’ for Hurting Sentiments, Director Ali Abbas Zafar Shares the Same on Twitter.

Reacting to this, yesterday Ali Abbas had apologised on behalf of the crew and cast, adding that they had no intention of hurting any religious sentiments. But with police complaints filed in Uttar Pradesh and Maharashtra, the makers finally decided to make some changes in the content of the show after a long discussion with the Ministry of Information & Broadcasting. Ali tweeted about the step and once again apologised to the audience. An excerpt of the statement read, "The cast and crew of Tandav have made the decision to implement changes to the web series to address the concerns raised towards the same."

Apart from the lord Shiva scene, Tandav takes a dig at various topical controversies including JNU issues, UP administration, right-wing politics among others. UP's Cheif Minister Yogi Adityanath's media advisor Shalabh Mani Tripathi had earlier warned the team of Tandav as he informed that police officials from UP are arriving in Mumbai soon to arrest the makers of the show. Tandav Row: UP Police Drives To Mumbai To Arrest Saif Ali Khan, Zeeshan Ayyub and Team Amidst the Controversy.

(The above story first appeared on LatestLY on Jan 19, 2021 08:47 PM IST. For more news and updates on politics, world, sports, entertainment and lifestyle, log on to our website latestly.com).