The Crown Season 4 has been labelled as one of the best seasons by fans and critics. The latest season premiered on Netflix on November 15. 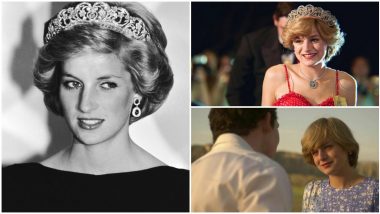 The Crown Season 4 has been labelled as one of the best seasons by fans and critics. The latest season that premiered on Netflix on November 15, comprising of 10 episodes, has not only traced about the life and reign Queen Elizabeth II (Olivia Colman), but it has also highlighted about Prince Charles (Josh O’Connor) and Lady Diana Spencer’s (Emma Corrin) romantic journey and their royal wedding followed by the troubles in their paradise due to Camilla Parker Bowles (Emerald Fennell). The Crown Season 4 Review: Olivia Colman, Tobias Menzies, Emma Corrin, Josh O’Connor’s Netflix Drama Is A Royal Treat, Say Critics.

All those who have managed to watch The Crown Season 4 have been hailing for the gripping narrative and most importantly the performance of Emma Corrin as Princess Diana. Twitterati have called the actress as perfect as Lady Di. Her uncanny resemblance with the late Princess of Wales has left the audience awestruck. Emma got into the skin of the character by sporting the perfect look as Princess Diana, nailing the accent, style, and much more. She recreated Diana with much love and that’s praiseworthy. Take a look at the pictures and messages shared by fans on Twitter for Emma Corrin’s performance as Princess Diana. The Crown Season 4: Emma Corrin’s Uncanny Resemblance To Princess Diana Will Leave You Awestruck! (View Pics).

Emma Corrin deserves all the awards thrown at her. She isn't playing Diana, she IS Diana. It's almost haunting. #TheCrown pic.twitter.com/OHeU9iEXyz

In an interview to Variety, Emma Corrin shared how she reacted when she was offered the role of Princess Diana for The Crown Season 4. She was quoted as saying, “I have a complete blackout in memory from when they offered me the role to when I was in the car calling my family on the way home.” So what do you have to say about Emma Corrin’s role as Princess Diana in The Crown Season 4? Share your thoughts with us in the comment section below.

(The above story first appeared on LatestLY on Nov 17, 2020 11:14 AM IST. For more news and updates on politics, world, sports, entertainment and lifestyle, log on to our website latestly.com).