The makers of The Crown Season 4 dropped the teaser of this much-awaited Netflix series, and fans are bowled over Emma Corrin, the beauty who is all set to play the role of Princess Diana. 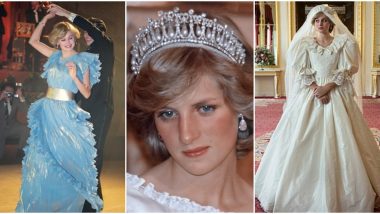 The makers of The Crown Season 4 dropped the teaser of this much-awaited Netflix series, and fans are bowled over Emma Corrin, the beauty who is all set to play the role of Princess Diana. It is isn’t easy to essay the role of this historical figure, but Emma has left the audience awestruck already with her uncanny resemblance to Princess Diana. The teaser gives a glimpse of the cheery Lady Diana Spencer, simple and joyous girl, and later her becoming as the Princess of Wales. From the styling, to mannerisms and many other moments, you will be thrilled to see how Emma has depicted the role of Princess Diana so beautifully. The Crown Season 4 Teaser On Netflix Gives A Glimpse Of Princess Diana And Prince Charles’ ‘Fairytale Journey’ (Watch Video).

There are pictures of Emma Corrin that has hit online in which one can see her in the look before her marital phase, then her as the bride (recreating the iconic moment), her official tours, her flowy gowns, side-swept pixie cute, and much more. Princess Diana was one of the most loved and extremely popular figure in the Royal Family. Before The Crown Season 4 premieres on Netflix, let’s take a look at Emma Corrin’s pictures as Princess Diana. The Crown: Netflix Drops The Premiere Date of Season 4, Teases Fans With A Royal Footage (Watch Video).

Journey Of Lady Diana Spencer To The Princess Of Wales

emma corrin is lady diana spencer in the new trailer for the fourth season of #TheCrown, november 15 on Netflix. pic.twitter.com/griszkBmic

Emma Corrin As The Most Popular Member Of The Royal Family

About playing the role of this iconic figure, Carolyn Harris, a Toronto-based royal author and historian was quoted as saying, “One of the biggest challenges for an actor assuming the role of Diana, Princess of Wales, is that the collapse of her marriage and her untimely death are so well-known that it would be tempting to portray her as a tragic figure throughout her life, foreshadowing events to come,” reports CBC.  The Crown Season 4 is all set to be streamed on Netflix from November 15.

(The above story first appeared on LatestLY on Oct 14, 2020 05:10 PM IST. For more news and updates on politics, world, sports, entertainment and lifestyle, log on to our website latestly.com).