The Crown Season 4 premiered on Netflix on November 15, 2020. It was one of the most anticipated series of the year that has finally made its way to the streaming giant. 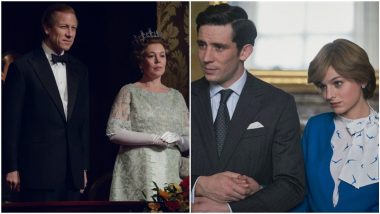 The Crown Season 4 premiered on Netflix on November 15, 2020. It was one of the most anticipated series of the year that has finally made its way to the streaming giant. The teaser, stills, trailer of the fourth season of The Crown had dropped the hint that it would not only highlight on the reign of Queen Elizabeth II (Olivia Colman), but it would also focus on the tension between the Queen and Prime Minister Margaret Thatcher (Gillian Anderson), bring forth the royal romance of Prince Charles (Josh O’Connor) and Lady Diana Spencer, and much more. The Crown Season 4 Teaser On Netflix Gives A Glimpse Of Princess Diana And Prince Charles’ ‘Fairytale Journey’ (Watch Video).

There are many who have managed to watch The Crown Season 4 on Netflix on the day it was premiered and it has reportedly turned out to be a royal treat. Not only the performances of the star cast have been praised, but critics have labelled this season as one of the best. Take a look at the reviews shared by critics on the latest series of The Crown. The Crown Season 4: Emma Corrin’s Uncanny Resemblance To Princess Diana Will Leave You Awestruck! (View Pics).

Hindustan Times - This is an emotionally rich season, perhaps my favourite of the show so far. And beneath its resplendent exterior is raging relevance. Through Thatcher, creator Peter Morgan makes bold statements about contemporary politics, and the authoritarian figures in charge of it. And do not forget the trifecta of female leads at the centre -- equals, and in many ways superior to the men around them -- an uncommon sight on television if there ever was one.

The Indian Express - It is Emma Corrin, who is the star of The Crown season 4. Casting Corrin, a newcomer, as Princess Diana was an astute decision, and it shows. The fresh-faced actor captures the nuances of the character (like Anderson) without doing or even attempting a direct impression. This is a full-bodied portrayal, and a lot of praise must also go to the director and writer. We can never know for sure how Diana really was in person, but like with every other major character in The Crown, Diana is written with empathy.

Firstpost - The season makes for some delightful episodic arcs such as the most watched wedding of the previous century; Charles and Diana’s Royal visit to Australia; the security breach at Buckingham Palace; the tragic, downward spiral of Princess Margaret; (a criminally underused Helena Bonham Carter) the much talked about rift between The Queen and the PM; each of which have been craftily conceptualised and lovingly essayed.

Pinkvilla - Just like the previous seasons, The Crown gets its casting spot on for characters of Princess Diana, Margaret thatcher, Michael Fagan and even the Queen's younger sons Prince Andrew and Prince Edward. Actors Olivia Colman, Josh O'Connor, Tobias Menezes, Helena Bonham Carter and Erin Doherty seem to be naturals as they reprise their roles and continue to dish out impressive performances.

So that’s what the critics have to say about The Crown Season 4. This season has 10 episodes and each episode has a spellbinding story with impressive performances. The Crown Season 4 is currently streaming on Netflix!

(The above story first appeared on LatestLY on Nov 16, 2020 10:15 AM IST. For more news and updates on politics, world, sports, entertainment and lifestyle, log on to our website latestly.com).