In The Crown Season 4, the viewers will be introduced to Lady Diana Spencer (Emma Corrin), her transformation as the Princess of Wales and her married life with Prince Charles, their ‘fairytale journey’ 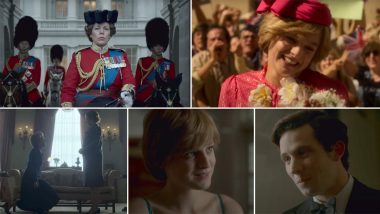 The Crown is one of the most popular web television series about the reign of Queen Elizabeth II and it is all set to roll into its fourth season. The third season gave a glimpse of Prince Charles’ (Josh O'Connor) affections for Camilla Shand (Emerald Fennell). Now in The Crown Season 4, the viewers will be introduced to Lady Diana Spencer (Emma Corrin), her transformation as the Princess of Wales and her romantic phase and married life with Prince Charles, their ‘fairytale journey’. The teaser released by the makers, offers a deep sense that all is not well with The Windsors. The Crown: Netflix Drops The Premiere Date of Season 4, Teases Fans With A Royal Footage (Watch Video).

The narrator says, “Here is the stuff of which fairy tales are made. A prince and princess on their wedding day. But fairy tales usually end at this point with the simple phrase, ‘They lived happily ever after’.” This is the first time that Lady Diana has been introduced. The teaser shows her a lovely, lively, simple young girl and her journey to becoming the princess. But it doesn’t show how the fairytale ends for Prince Charles and Princess Diana. The teaser also introduces Margaret Thatcher (Gillian Anderson), the British Prime Minister, who came to power in 1979. The Crown Will Have Its Sixth and Final Season on Netflix, Confirms Show Creator Peter Morgan.

The first season showed Elizabeth – Philip’s marriage, her becoming the Queen post the demise of her father George VI, Winston Churchill’s journey as the Prime Minister and how the Queen’s equation with her sister Princess Margaret affects as she cannot marry Peter Townsend. The second season depicts the Suez Crisis, the prime ministers who come into play after Winston Churchill and the scandal of the Profumo affair. The third season not only introduced Prince Charles’ ladylove Camilla Shand but it also gave a glimpse of the 25th anniversary of Queen Elizabeth II’s accession to the throne that was celebrated with parades.

The Crown Season 4 is one of the most awaited series. It will be premiered on the streaming giant Netflix from November 15, 2020.

(The above story first appeared on LatestLY on Oct 14, 2020 09:45 AM IST. For more news and updates on politics, world, sports, entertainment and lifestyle, log on to our website latestly.com).