Netflix has teased fans with a mini-glimpse into The Crown S4 and has also released the premiere date of the series. The Crown Season 4 is all set to hit the streaming giant on November 15, 2020. 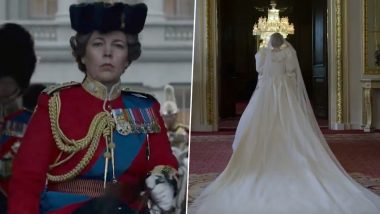 Netflix's royal drama The Crown Season 4 is all set to stream on the OTT platform soon. The last season of the drama was out at the end of 2019 and fans have been waiting with bated breath for the upcoming season. Now, the official page of Netflix has teased fans with a mini-glimpse into the period drama and have also released the premiere date of the series. The Crown Season 4 will hit the streaming giant on November 15, 2020. The previous season saw Olivia Colman taking over the power as Queen Elizabeth II from Claire Foy. And interestingly the upcoming season will see Olivia joined by Gillian Anderson and Emma Corrin. Jonathan Pryce Roped In to Play Prince Philip in The Crown's Fifth and Sixth Seasons.

The video gives a little peek-a-boo into the life of the royal family. In the clip, we hear Queen Elizabeth II uttering some golden words as she says, “Something as important as the monarchy simply cannot be allowed to fail.” We then get to see Gillian Anderson as Margaret Thatcher and Emma Corrin as Princess Diana. That's not it, as, in the end, we see Diana flaunting her back in a wedding trousseau. The Crown Will Have Its Sixth and Final Season on Netflix, Confirms Show Creator Peter Morgan.

Created by Peter Morgan, The Crown Season 4 is going to be the last one for the current cast and Colman, who’ll now make way for the next generation, in seasons five and six. With the latest tour inside the storyline of the prestige drama, we can't wait for it to premiere soon. Stay tuned!

(The above story first appeared on LatestLY on Aug 20, 2020 08:33 PM IST. For more news and updates on politics, world, sports, entertainment and lifestyle, log on to our website latestly.com).