The Enforcement Directorate (ED) will file a 5,000-page charge sheet in connection with MGNREGA fund scam involving suspended IAS officer Pooja Singhal and others before a Jharkhand court. 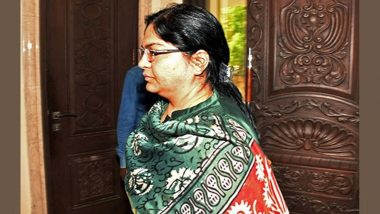 Besides Singhal, few mining officials and others also have been named as accused in the matter. IAS Sanjay Popli Corruption Case: 12 kg Gold, 3 kg Silver, Four iPhones Recovered in Raid by Vigilance Bureau at Arrested IAS Officer’s House in Chandigarh

Singhal, the mining secretary in Jharkhand, was dismissed from her post soon after her arrest.

In May, the ED grilled Ravi Kejriwal, the former Jharkhand Mukti Morcha (JMM) treasurer in this connection.

The central probe agency had scanned last three years' transactions of Singhal to check the suspicious money trail if any.

It also scanned all her properties.

Earlier, four cars belonging to Singhal's charted accountant Suman Kumar were seized in May. The source said that since someone else had made the payments for luxury the cars raising suspicion. Few incriminating documents were also recovered by the ED.

During the investigation, the probr agency had recovered around Rs 19 crore in cash. It was said to be Singhal's money.

Statements of Singhal and her husband were recorded in the matter.

(The above story first appeared on LatestLY on Jul 05, 2022 02:41 PM IST. For more news and updates on politics, world, sports, entertainment and lifestyle, log on to our website latestly.com).