The national capital continued to reel under severe heatwave conditions for the second day running on Wednesday, with the maximum temperature touching the 42-degree Celsius mark, according to the India Meteorological Department (IMD). 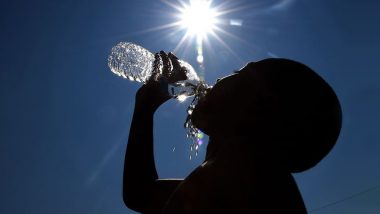 New Delhi, June 30: The national capital continued to reel under severe heatwave conditions for the second day running on Wednesday, with the maximum temperature touching the 42-degree Celsius mark, according to the India Meteorological Department (IMD). As per the IMD, the situation might improve on July 2 and July 3 with predictions of light rain.

The IMD's regional forecasting centre on Wednesday said that the conditions are still 'not favourable' for monsoon, which will be 'delayed'. On Tuesday, Delhi had witnessed the first severe heatwave of the year with its maximum temperature soaring to 43-degree Celsius. On Monday, the IMD had predicted that Delhi and its nearby areas will have to wait for another week before experiencing the first monsoon showers. Weather Forecast: Progress of Monsoon in Delhi, Punjab and Parts of North India Likely To Be Slow, No Heatwave Conditions During Next 5 Days.

After arriving two days late in Kerala, the monsoon had raced across the country, covering eastern, central and adjoining northwest India, seven to 10 days ahead of schedule, the IMD said.

"The southwest monsoon has so far covered most parts of the country except parts of Rajasthan, Delhi, Haryana and Punjab. Since June 19, there has not been any progress of monsoon. This is mainly due to the impact of mid-latitude westerly winds and unfavourable Madden Julian Oscillation (MJO) and the absence of formation of low pressure system over North Bay of Bengal," IMD said.

Earlier, the met department had said that the wind system may reach Delhi by June 15, which would have been 12 days early. However, westerly winds have been blocking its advancement into Delhi, parts of Uttar Pradesh, Rajasthan, Punjab and Haryana. Normally, monsoon reaches Delhi by June 27 and covers the entire country by July 8.

(The above story first appeared on LatestLY on Jun 30, 2021 11:24 PM IST. For more news and updates on politics, world, sports, entertainment and lifestyle, log on to our website latestly.com).