Linking the rising cases of COVID-19 patients to Delhi, UP and Haryana had sealed their borders with the national capital except for a few days when Haryana opened them. From June 1, the Delhi government announced that its borders will be sealed for a week. 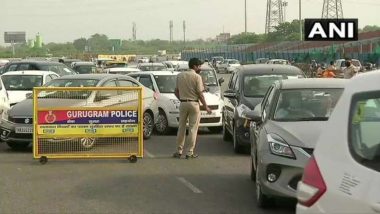 New Delhi, June 4: While almost half of NCR residents do not want borders opened due to high number of coronavirus cases in Delhi, about 66 per cent of Delhiites want reopening of the borders with Noida, Ghaziabad, Gurugram and Faridabad. According to a survey by LocalCircles, more residents of Noida and Faridabad are in favour of border opening than of Gurugram and Ghaziabad. Delhi shares its borders with Uttar Pradesh and Haryana. Everyday lakhs of people cross these state borders in the NCR to get to work in New Delhi, Gurgaon, Faridabad, Noida and Ghaziabad.

Linking the rising cases of COVID-19 patients to Delhi, UP and Haryana had sealed their borders with the national capital except for a few days when Haryana opened them. From June 1, the Delhi government announced that its borders will be sealed for a week. Delhi-Noida Border Sealed by UP Government Amid Coronavirus Crisis, Exemptions to Public Servants And Healthcare Workers.

"LocalCircles conducted a survey in Delhi and NCR at the city level and asked the residents if their city borders should be opened for unrestricted movement of people. Citizens of Delhi were asked if the Delhi borders with NCR cities -- Noida, Ghaziabad, Gurugram and Faridabad -- should be opened and unrestricted movement of people should be permitted," LocalCircles said in a statement.

The Ministry of Home Affairs guidelines released on May 30 said that there will be no restriction on inter-state and intra-state movement of people and goods and no additional permission will be required for such travel. However, the MHA had left it to the respective state governments and local administrations to take a final call on the matter. Over 20,000 citizens from Delhi, Gurgaon, Faridabad, Ghaziabad and Gautam Buddh Nagar participated in the survey.

Overall, the NCR cities have collectively about 2,500 Covid cases. On the other hand, Delhi has reported more than 23,000 COVID-19 cases so far and stands at the third position as the most infected state in the country.

"The results of the survey indicate that although Delhiites want the NCR borders to be de-sealed so that they could commute to work easily, the residents of the neighbouring cities are split and a sizable percentage is still not in favour of border opening with the concerns that the fast spreading coronavirus in the state of Delhi could spread to their relatively better placed cities as well," the statement added.

(The above story first appeared on LatestLY on Jun 04, 2020 04:02 PM IST. For more news and updates on politics, world, sports, entertainment and lifestyle, log on to our website latestly.com).