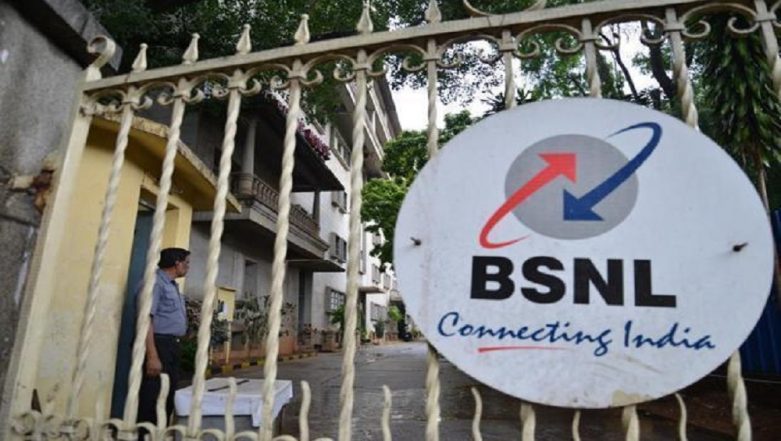 New Delhi, Aug 8: The government is mulling to transfer land assets and loans of loss making BSNL to a special purpose vehicle in an effort to make the state-owned telecom firm a debt free entity.

Employees Union of BSNL, however, has alleged that the land parcels proposed to be transferred to the SPV at value of Rs 20,210 crore are at prime locations of big cities and are "grossly undervalued". BSNL Sends SOS to Narendra Modi Govt, Says Infuse Funds Immediately to Clear Salaries of Employees.

BSNL management denied the allegations saying the valuation has been done only on indicative basis and final valuation will be done before disposing the proposed land parcels.

The SPV is proposed to sell the land parcel and pay off BSNL debt estimated to be around Rs 15,000 crore.

"It is astonishing to note that in the name of monetisation of lands, for the purpose of making BSNL a debt free company, BSNL's land are being transferred to the SPV at a "throw-away price," BSNL Employees Union said in a letter to the telecom secretary.

The union said that market value of the 63 land parcels identified for transfer to SPV is very high, however, these are being transferred at a "dirt cheap price" in the name of book value.

When contacted BSNL Chairman and MD P K Purwar said, "Such allegations are baseless and incorrect since the valuation has been done on indicative basis for the purpose of preparation of cabinet note. Final valuation will be done by a government registered valuer. The SPV proposed is also 100 per cent owned by government of India like BSNL".

The union said that it gathered information around land parcel of Chennai and Kerala circle and found them grossly under valued.

It also alleged that BSNL has identified 10 acres of land in the Regional Telecom Training Centre in Thiruvananthapuram at a value of Rs 10 lakh/cent (apprx 435.5 sq ft), while Kerala government six years ago paid Rs 15 lakh/cent compensation for road widening.

"The SPV, which has been created to sell BSNL's land, is going to hand over these lands to the corporates and to the entrepreneurs, at a throw away price. We are afraid that, in this process, BSNL is going to incur a massive financial loss," the union said in the letter.